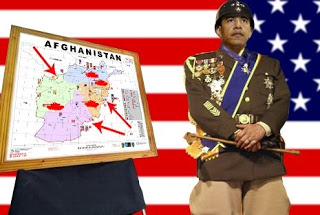 obamessiah coronation: the flock is led to the slaughter

from kurt nimmo: “People don’t remember what fascism was, I am afraid. A lot of people think, especially here in the U.S. where people are ignorant, people believe that fascism is a purely top down phenomenon,” author Webster Griffin Tarpley told the Dutch journalist Daan de Wit during an interview on May 11, 2008. “Fascism is the march on Rome; fascism is the storm troopers fighting in the streets. It is a gutter and street level movement; it is a grass roots movement that has anti-authoritarian cover, anti-parliamentary, anti-congress cover. It has left cover. Mussolini of course was a revolutionary socialist and a lot of people in his movement were left wingers, you now, extreme trade union activists, syndicalists and stuff like this.” ... In order for the banksters and ruling elite behind Obama to realize their political agenda and wipe out all effective opposition in the process, the Obama mass movement — initially described as merely a grassroots political movement organized to get Obama elected — will now become “Obama 2.0,” or officially “Organizing for America,” a “new group… that aims to continue the grassroots advocacy that the former Illinois Senator began in his presidential campaign,” according to the Washington Post.

celebrations begin as obama's inauguration nears
from mcclatchy: President-elect Barack Obama rolled along Saturday from Philadelphia to the nation's capital on a four-stop train tour that drew thousands along the way and paid homage to the arduous inaugural journey made by his political hero Abraham Lincoln, 148 years ago.

americans flock to dc to be part of obama's inauguration
from mcclatchy: Judi Wortham, of Nashville, Tenn., saw the fleece hat and had to have it, shiny and bedazzled as it was, decorated in a sparkly copy of Shepard Fairey's iconic painting of president-elect Barack Obama. "Anything that goes like this, 'bling, bling,'" she said, making blinking motions with her hands before she sat down to lunch at Old Ebbitt Grill near the White House. "Anything that's shiny. So of course I love the new president."

nation's hopes high for obama, poll shows
from washington post: Even as they express deep concern about the current direction of the country, Americans are overwhelmingly optimistic about Barack Obama and are pinning their hopes for recovery from a massive economic collapse on the president-elect, according to a new Washington Post-ABC News poll. Nearly eight in 10 of those surveyed say the country is headed seriously off course. Seven in 10 worry about their family's finances, and 94 percent say the country's economy is in "not so good" or "poor" shape, the most negative assessment in more than 23 years of Post-ABC polling. Obama will take office Tuesday as the most popular incoming president in a generation. He also will enter the White House with a broad mandate to act that was missing when George W. Bush was elected by the narrowest of margins in 2000.

obama inauguration to generate over a half-billion pounds of co2
from business & media: Here’s an environmental impact story you’re not likely to see in the mainstream media. Neither NBC’s chief environmental affair correspondent Anne Thompson, nor ABC correspondent Bill Blakemore nor CBS “60 Minutes” correspondent Scott Pelley – all of whom have been eager over the years to expose so-called crimes against the environment – have rushed to report on the massive carbon footprint of the Obama inauguration. But a comprehensive new study by The Institute for Liberty (527kb PDF) (IFL) took an in-depth look at each component of the Jan. 20 inauguration in Washington, D.C., and estimated that 575 million pounds of carbon dioxide will be emitted in the atmosphere for the inauguration – which is roughly equal to what the average American household would produce in 57,598 years.