president obama: a fraud you can believe in

from the bulletin: The hopes and prayers of the American people have finally been answered with the election of a new president: A fraud they can believe in. Yes, and even as Barack Obama demonstrates he is a fraud, phony and hypocrite par excellence - who also happens to be in way over his head - the American people still believe in him. Yes, love is grand and his approval rating is still miraculously high. If the truth were known, that approval rating would be sinking lower than the stock market, home prices or the economy. I doubted he was the Messiah, but now I’m not sure. When a president can be the greatest wealth destroyer in history and still maintain high approval ratings, maybe he does have supernatural powers. What’s more he is god-like. It is said God so loved the poor that he made many of them; Mr. Obama is almost outdoing God by turning so many into poor people.

obama is pushing US economy downhill
from russia today: Obama's policy is pushing the US economy downhill, says vice president of the conservative Business & Media Institute Dan Gainor. U.S. President Barack Obama signed his first government spending bill, worth $410 billion, to fund most government operations through to September 30. The bill is filled with pet projects, so called 'earmarks', a practice Obama had promised to get rid of. The President himself called the document 'imperfect', but necessary.

audio: guns & butter w/ michel chossudovsky:
obama budget will impoverish US
from global research: The administration's 2010 budget will entail the most drastic curtailment in public spending in American history, leading to social havoc and the potential impoverishment of millions of people. Defense spending and bank bailouts will consume all government revenue resulting in fiscal collapse that will lead to the privatization of the state.

why the US under obama is still a dictatorship
from future of freedom foundation: Two weeks ago, when the Obama administration announced that it was bringing to an end the disturbing isolation endured by Ali al-Marri, a U.S. resident who has been held without charge or trial for seven years and two months - and who, most worryingly, has spent the last five years and nine months as an “enemy combatant” in solitary confinement in the Naval Consolidated Brig in Charleston, South Carolina - it was clear that one of the Bush administration’s most arrogant and un-American policies was coming to an end. President Obama clearly regarded al-Marri’s imprisonment as significant, as he issued a presidential memorandum on his second day in office ordering the Justice Department to review the Qatari national’s case, and the announcement that al-Marri was to be moved out of his seemingly endless legal limbo and into the federal court system demonstrated that, in this specific case at least, the president was sticking to his word... As a result, you may be thinking that the president no longer has the power to hold Americans without charge or trial as “enemy combatants,” but if this is the case then you may be — and should be — dismayed to learn that a previous ruling to this effect still stands, which was not addressed by the Supreme Court, and which has not been addressed by the Obama administration either.

obama administration withdraws 'enemy combatant' definition
from thinkprogress: Today, the Obama Justice Department abandoned one of the most prominent phrases of the Bush administration - “enemy combatant.” In a filing with the DC District Court, the DoJ said that it would no longer use the term and asserted a new standard for the government’s authority to hold detainees at Gitmo. The Obama administration is still claiming that it has the authority to hold prisoners there, but it will now be based on authority from Congress and the international laws of war. The Bush administration claimed that the president could unilaterally hold prisoners without charge.

the president has the authority to detain persons 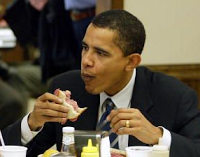 from washington times: President Obama on Saturday created a food safety working group to advise him on new rules and tools to protect the U.S. food supply and tapped two people to serve at the top of the Food and Drug Administration. Mr. Obama said food-borne illness outbreaks have increased in recent years - including major incidents of tainted spinach in 2006, salmonella in peppers or tomatoes last year and the peanut outbreak this year. He said that means the U.S. must do more than it has been and called on his food safety group, led by the secretaries the departments of Agriculture and Health and Human Services, to give him recommendations.