from reuters: Officials from the Bush and Obama administrations crossed paths at the White House Tuesday to participate in a homeland security exercise. The scary hypothetical scenario was how the federal government should respond to a terrorist attack using improvised explosive devices on the transportation infrastructure and other economic targets in major U.S. cities. They also looked at responses to other disasters like pandemic flu and hurricanes during briefings, including time spent in the White House basement “Situation Room” where national security crises are handled.

obama to send more troops to afghanistan
from washington post: President-elect Barack Obama intends to sign off on Pentagon plans to send up to 30,000 more U.S. troops to Afghanistan, but the incoming administration does not anticipate that the Iraq-like "surge" of forces will significantly change the direction of a conflict that has steadily deteriorated over the past seven years. Instead, Obama's national security team expects that the new deployments, which will nearly double the current U.S. force of 32,000 (alongside an equal number of non-U.S. NATO troops), will help buy enough time for the new administration to reappraise the entire Afghanistan war effort and develop a comprehensive new strategy for what Obama has called the "central front on terror."

hillary won't rule out military force on iran
from dpa: US secretary of state-designate Hillary Clinton on Tuesday would not rule out the possible use of military force by the Obama administration to prevent Iran from acquiring nuclear weapons capability. 'We are not taking any options off the table at all,' Clinton told the Senate Foreign Relations Comittee during her confirmation hearings to become the top US diplomat.

from paul joseph watson: Barack Obama’s “climate czar” Carol Browner has been exposed as being a member of Socialist International, a highly influential group headed by a Bilderberg Group luminary that calls for the implementation of global government, despite Socialist International’s attempts to seemingly “memory-hole” information about Browner on their website. It doesn’t take a rocket scientist to understand that Obama and his cabinet are preparing to exploit fearmongering about global warming to push new measures of taxation, regulation and internationalism. Obama himself has vigorously promoted the revival of a bill that would slash carbon emissions by 80 per cent, a move that would inflict a new Great Depression, cost millions of jobs, and sink America to near third world status. Obama has also publicly stated his intention to create a new infrastructure of “green brigades” and informants to regulate every aspect of our behavior in the name of saving the planet under the guise of a “national civilian security force,” a cadre we are guaranteed will be as strong or stronger than the U.S. Army.

obama picks cia vet brennan as counterterror adviser
from washington post: Barack Obama has picked John O. Brennan as his top adviser on counterterrorism, a role that will give the CIA veteran a powerful voice on the government's use of security contractors and on other sensitive issues in which he recently has played a private-sector role.

inaugurate this: waiting for obama 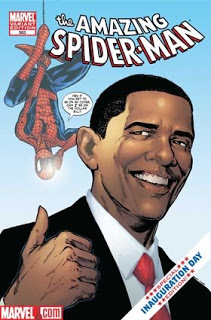 from nytimes: Among the millions expected to converge on the nation’s capital for Inauguration Day on Jan. 20 will be at least one superhero: Marvel Entertainment is publishing a comic book in which Spider-Man meets President-elect Barack Obama and foils a scheme by the Chameleon to ruin the Inauguration. The six-page story, written by Zeb Wells and illustrated by Todd Nauck and Frank D’Armata, finds the wall-crawler in Washington, where he uncovers a plot to undermine the incoming president. Mr. Obama has previously stated that he is a comic book fan, and a Spider-Man fan in particular. The story will be part of Amazing Spider-Man No. 583 and arrives in stores on Wednesday. Another comic book company embracing the president is Dark Horse, which will be sending him 30 collected editions of comics featuring Conan the Barbarian. Mike Richardson, Dark Horse’s publisher, said he hoped the comics would provide “just a bit of escape in those brief moments away from the office.” The delivery is something of a family affair. It is being orchestrated between Ari Emanuel, a Hollywood agent who represents Dark Horse’s film properties, and his brother Rahm Emanuel, the president-elect’s chief of staff.

obama warns of dire consequences without stimulus
from ap: President-elect Barack Obama warned of dire and long-lasting consequences if Congress doesn't pump unprecedented dollars into the national economy, making an urgent pitch Thursday for his mammoth spending proposal in his first speech since the election. "In short, a bad situation could become dramatically worse" if Washington doesn't go far enough to address the spreading crisis, the Democrat said as fresh economic reports showed an outlook growing increasingly grim.