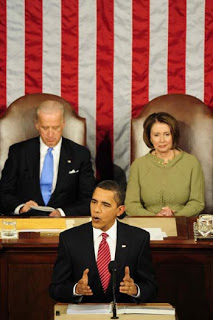 here's a couple of telling takes on the big speech: first a sports analogy, as if it's all a big game...

from time: Rarely has a pep talk come with so much pomp. The setting, for starters, was no high school locker room at halftime, with sweaty teenagers scratching their gym socks. Robed Supreme Court justices and barrel-chested generals sat in the front row in the U.S. House Chamber, a gold encrusted place overflowing with political power. For a quarter mile around, police stood shivering in the cold, watching in clumps on street corners, stopping anyone who looked out of place. And the coach commanding everyone's attention in the center of the room was no amateur part-timer looking to relive his glory days on the court. He was none other than the President of the United States, Barack Hussein Obama, the most watched man in the world, who had come before his country and its government during primetime to say, "Come on team, we can play better. When the buzzer sounds again, we're going to go out there and play our game, like the champions we know we are." He didn't use those words exactly. But he came pretty close. "We will rebuild. We will recover, and the United States of America will emerge stronger than before," he announced upon taking the podium Tuesday, at his first presidential address before a joint session of Congress.

the next one assures us that this admin will continue the fraudulently catastrophic war of terror...
obama ushering in "new era of engagement" with world
from dpa: US President Barack Obama said Tuesday that his administration is ushering in a 'new era' of diplomacy, vowing to strive for Middle East peace and assuring the nation that he will not back down in the war on terrorism. In his first major address before Congress, Obama said he will strengthen alliances and seek new ones throughout the world while emphasizing the importance of negotiations to resolve differences. "We are showing the world that a new era of engagement has begun. For we know that America cannot meet the threats of this century alone, but the world cannot meet them without America," Obama said. "We cannot shun the negotiating table, nor ignore the foes or forces that could do us harm. We are instead called to move forward with the sense of confidence and candor that serious times demand."

and then the kicker, the one about getting out of iraq [insert bridge-for-sale joke here] ...
obama to withdraw most troops from iraq by august 2010

from thinkprogress: President Obama is expected to announce this week that he will withdraw most U.S. troops from Iraq by August 2010, 19 months after his inauguration. Obama’s plan will initially leave a “residual force” of 30,000 to 50,000 troops. “A further withdrawal will take place before December 2011, the period by which the U.S. agreed with Iraq to remove all American troops.” Obama was also considering 16-month and 23-month timetables; the 19-month time frame was reportedly a “compromise.”

and all the blahbittyblah about jindal, home aid, etc &
here's the full text of obama's speech