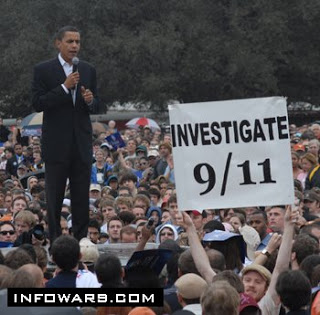 apparently the 'jersey girls' have gone ga-ga for the obamessiah & forgotten all about the unanswered questions of 9/11...

from washington post: President Obama assured relatives and victims of the Sept. 11, 2001, attacks and the bombing of the USS Cole that he is keeping an open mind about how to handle the approximately 245 detainees held at the U.S. military prison at Guantanamo Bay, according to participants in an hour-long meeting yesterday at the White House...

Lorie Van Auken, a leader of September 11th Advocates, a group headed by four New Jersey women who lost their husbands in the attacks, called the meeting "impressive," saying Obama gave detailed answers to their questions and allayed many of their concerns. She said the president did not rule out some form of military commissions in the future and acknowledged shortcomings in dealing with terrorism suspects in regular criminal courts. "He acknowledged this was quite a mess and it really needed to be looked at by his legal team and by him," said Van Auken, whose husband, Kenneth Van Auken, was killed in the World Trade Center and whose group supports closing Guantanamo Bay. "I think everybody recognized, no matter which side of the issue they're on, that this is a quagmire that will not be solved easily."

Mindy Kleinberg, another member of the group, said Obama also made clear that "nobody is just going to get freed by the closing of Guantanamo. I think the point was that you have to make sure they have a system in place that can actually work," said Kleinberg, whose husband, Alan Kleinberg, also died in the World Trade Center. "I think even the people who came to the meeting who wanted to keep it open could understand his point of view." 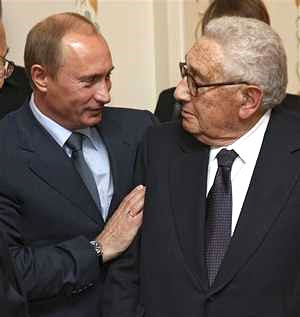 from kurt nimmo: It is yet another glaring example there is no difference between Bush, Obama, or anybody else anointed by the global elite to serve as presidential window dressing — the Daily Telegraph reports this morning that former Reichsminister of State and Rockefeller minion Henry Kissinger was dispatched by the Obama administration to talk with Russian president Dmitry Medvedev about reducing stockpiles of nuclear warheads. “The decision to send Mr. Kissinger to Moscow, taken by Mr Obama when he was still president-elect, is part of a plan to overcome probable Republican objections in Congress,” reports Adrian Blomfield, Moscow correspondent for the British newspaper. It is said the “secret negotiations” were conducted in December. Obama, of course, runs nothing and the reprehensible octogenarian war criminal Kissinger was dispatched on orders of the elite, not Obama. It is said Kissinger had a sit-down with former Russian boss Vladimir Putin at his country house outside of Moscow. “While the details of the ambitious initiative are yet to be revealed, the proposal to return to the negotiating table after eight years of reluctance in Washington has been welcomed in Britain and elsewhere,” reports the Daily Telegraph.

newt compares obama to carter
(well, they are both brzezinski puppets) 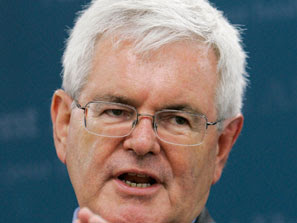 from politico: Former House Speaker Newt Gingrich issued a sharp critique of President Barack Obama's speech before House Democrats in Williamsburg, Va. "It shrinks his presidency," said Gingrich Friday at the American Enterprise Institute. "I thought last night's speech in Williamsburg actually was a lot more like Carter and a long way from Reagan." Gingrich spoke as part of a panel debate titled "Rendezvous with Destiny," which examined the life and legacy of former President Ronald Reagan. Gingrich hosts a documentary film of the same name, produced by Citizens United, a conservative research organization.