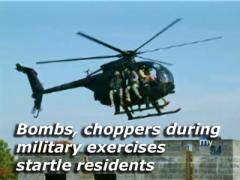 from wwltv: Residents in and around New Orleans have been hearing the sounds of low-flying helicopters and what sounds like bomb blasts over the past few nights, but the sounds are part of a training exercise for some of America's elite military troops... according to military officials, it’s a training exercise that brought about 150 U.S. troops from the U.S. Special Operations Command to train in New Orleans for urban warfare... The forces are using simulated ammunitions, almost like paintball pellets, to conduct the training... The NOPD did put a press release out about the training, and WWL-TV aired a story about it; however, that was a week ago. Since U.S. Special Operations Command hasn't done a similar training here since 2000, it has caught many people by surprise.

US troops in black helicopters invade new orleans
from paul joseph watson: The New Orleans Police Department, along with 150 active duty U.S. troops, are currently engaging in what they describe as “military training” as black helicopters whizz around the city dropping bombs in the latest example of Americans being incrementally conditioned to accept a state of de facto martial law. The training has been ongoing since January 27 and involves “the use of military helicopters flying after dark throughout the city,” according to an Associated Press report.

Residents were warned “not to panic” if they witnessed the training and were assured that the activities had “been carefully planned and are safe”. However, initial reports before the exercises began claimed that the training would only involve police, when in fact 150 U.S. troops from the U.S. Special Operations Command are also involved as part of urban warfare training. Residents described hearing low flying helicopters and even bombs during the course of last night. “I heard a bunch of explosions starting at about 10 p.m. They were about ten seconds apart, and then they’d stop, and we thought it was over, but then they started again,” said Gigi Burk. The exercises are scheduled to end on February 8.

The militarization of law enforcement has rapidly advanced since 9/11 as part of a general program to prepare Americans for outright martial law following a mass casualty event. A new bill introduced in Congress authorizes the Department of Homeland Security to set up a network of FEMA camp facilities to be used to house U.S. citizens in the event of a national emergency.

The National Emergency Centers Act or HR 645 mandates the establishment of “national emergency centers” to be located on military installations for the purpose of to providing “temporary housing, medical, and humanitarian assistance to individuals and families dislocated due to an emergency or major disaster,” according to the bill. With active duty military personnel already being stationed inside the U.S. under Northcom, partly for purposes of “crowd control,” fears that Americans could be incarcerated in detainment camps are all too real. A resident filmed the helicopters at night around the University of New Orleans Lakefront Campus on February 3. Watch the clip below. (part2 & part3)