obamessiah: prosecution, continuity, eligibility or the lack of all

from raw story: Joe Biden would not directly answer a question about whether or not top-ranking members of the Bush administration should be prosecuted for abuse at prisons around the world. Interviewed by ABC News' George Stephanopolous, Biden said he was "not ruling it in and not ruling it out."

obama will not prosecute bush & cheney
from tehran times: Mark my words. President Obama will follow in the footsteps of his predecessors by not holding his predecessor, George W. Bush and members of his administration, liable for violating the United States Constitution and criminally responsible for treason, 9/11, financial fraud, mass murder and war crimes.

continuity we can believe in
from counterpunch: This is part mea culpa, so please indulge my quoting myself. Back on November 5th much of the country celebrated the end of an error and the election of the first non-white president. (We’ll get to “male” and “Christian” later – much later, I suppose. "Ivy League?" Maybe never.) I wrote: “We’ll know soon enough how hard we’ll have to fight bad Obama policy. Even before Inauguration Day, we’ll know. Who Obama picks for his “team” will be all-telling…If President Obama fails to break completely with the narcissistic Baby Boomer politicians; we’ll know. If he keeps Gates at Defense or appoints Powell in his place; we’ll know.” Well, that sure was quick.

obama, the military & the threat of dictatorship
from wsws: With his choice of Admiral Dennis Blair as director of national intelligence, President-elect Barack Obama has now named three recently retired four-star military officers to serve in his cabinet. This unprecedented representation of the senior officer corps within the incoming Democratic administration is indicative of a growth in the political power of the US military that poses a serious threat to basic democratic rights. As head of the US military’s Pacific command in 1999-2000, Blair was distinguished by his efforts to solidarize the Pentagon with the military of Indonesia as it carried out butchery in East Timor, effectively vetoing the half-hearted human rights concerns voiced by the Clinton administration.

explain to me again why we chose obama instead of ron paul?
from op-ed news: Here is another piece written by Ron Paul, and yet again he is correct to the infinite degree. He is a regular Nostradamus as far as I'm concerned, predicting nearly every major catastrophe of the last 8 years and doing so years before they occurred. He predicted the Russian/ Georgian conflict would be a possible consequence of our invasion in Iraq (check) he predicted the housing collapse (check) he predicted the implosion of the banking system clear back in the 90s (check) he predicted the Iraq war would be an endless quagmire, and on and on and on. When no one listened and his clueless fellow Republicans had the nerve to laugh at him on stage, he still spoke the truth, and once again, he has been right all along. This time about the real agenda of Barack Obama and the mindless Democrats in Congress. More elite government, more spending, more inflation, less freedom, less prosperity, and a complete disregard for the voice of the people (bailouts, anyone?) We can all have our disagreements about his disdain for taxes and funding different government programs, but when it comes to monetary policy, this man has all but never been wrong.

video: will the north american union happen under obama? 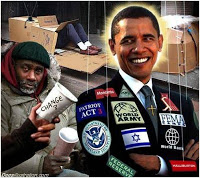 from david icke: I am writing this in the last days of 2008 as I watch with dismay as vast numbers of people across the world, including many who should know better, have been duped by the mind-game called Operation Obama. Even people with some understanding of the conspiracy have said things like: 'Well, at least he's not Bush' and 'Well, at least it's great to see such a new spirit of hope'. No, he's not Bush - he's potentially far more dangerous; and what is the use of a spirit of 'hope' if it's based on a lie? In fact, what use is 'hope' at all? Obama's wife, Michelle, who I wouldn't trust to tell me the date in a calendar factory, said that 'everything begins and ends with hope'. Utter nonsense. Hope is a meaningless emotion because its fruits are always in the future and, by definition, never in the NOW. Hope is like riding a carousel horse; no matter how fast you go you never get closer to the one in front. The idea, however, is to persuade you to stay on the horse, despite the evitable disappointment, in the 'hope' that things will change. But they don't because the very system is designed to prevent it.

another obama eligibility suit filed in indiana
from ap: Two Indiana men filed a lawsuit claiming that President-elect Barack Obama is not eligible to serve as president. The suit questions whether Obama meets the constitutional requirement that the president must be a "natural born citizen." Obama's birth certificate says he was born in Hawaii, but his father was not a U.S. citizen and some have claimed the document is a fake. The U.S. Supreme Court this month refused without comment to hear a challenge to Obama's citizenship. The Indianapolis Star reports the Indiana suit was filed in Marion Superior Court in Indianapolis by Steve Ankeny, New Castle, and Bill Kruse, Roselawn. It names Gov. Mitch Daniels and the Republican and Democratic national committees as defendants, saying they failed to uphold the Constitution when they certified results of the November election. It asks Judge David Dreyer to throw out the election results.

power cut left obama & family in dark for 12hrs
from reuters: U.S. President-elect Barack Obama was without electricity for 12 hours at his vacation home on Oahu following a major blackout across Hawaii's most populous island, an aide said on Saturday. The outage on Friday night left hundreds of thousands of people, including Obama and his family, in the dark as an electrical storm rolled over Oahu. "Power was restored to the residence during the 6 o'clock hour this morning. The Obama family is grateful for the offers of assistance from local officials," said Ben Labolt, a spokesman for Obama.

military protected obama when the lights went out

power outage: obama hawaii birth records left vulnerable
from total 411: This is a perfect opportunity to switch out the original vital statistics records of Barry Obama for newly-created forgeries. NB:"Heavy showers are of a special character, in that they are seldom accompanied by thunder and lightning. Indeed, a flash of lightning followed by a crash of thunder is infrequent enough so that many people who have lived only in Hawaii have no real notion of the violence of Mainland thunderstorms as evidenced by the lightning and thunder that are their typical accompaniment." Draw your own conclusions. 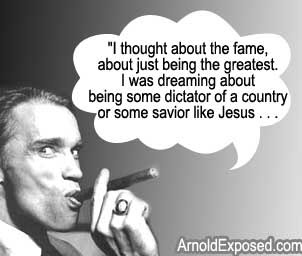 from dpa: Former action movie star Arnold Schwarzenegger has not satiated his political ambitions by serving as California governor. The Austrian-born superstar revealed in an interview on 60 Minutes late Sunday night that he would 'absolutely' like to be United States president if the Constitution could be changed to allow foreign-born Americans to run for the White House. 'Well, you're a man of no small ambition. If the Constitution was changed, you'd like to be president, wouldn't you?' 60 Minutes journalist Scott Pelley asked. 'Yeah, absolutely,' Schwarzenegger replied. 'I think that I am always a person that looks for the next big goal. And I love challenges. 'I always set goals that are so high, that are almost impossible to achieve. Because then, you're always hungry for climbing and climbing. Because it's always interesting. The climb is always interesting. When you get there you just have to pick another goal.' For now, it would be impossible for him to become president. Schwarzenegger, who was born in Austria and became a US citizen in 1983, is not a 'natural born citizen' of the US, as required by the Constitution.