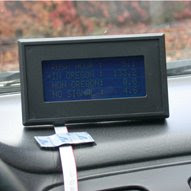 from albany democrat herald: A year ago, the Oregon Department of Transportation announced it had demonstrated that a new way to pay for roads - via a mileage tax and satellite technology - could work.

Now Gov. Ted Kulongoski says he’d like the legislature to take the next step.

As part of a transportation-related bill he has filed for the 2009 legislative session, the governor says he plans to recommend “a path to transition away from the gas tax as the central funding source for transportation.”

What that means is explained on the governor’s website: “As Oregonians drive less and demand more fuel-efficient vehicles, it is increasingly important that the state find a new way, other than the gas tax, to finance our transportation system.”

According to the policies he has outlined online, Kulongoski proposes to continue the work of the special task force that came up with and tested the idea of a mileage tax to replace the gas tax.

The governor wants the task force “to partner with auto manufacturers to refine technology that would enable Oregonians to pay for the transportation system based on how many miles they drive.”

The online outline adds: “The governor is committed to ensuring that rural Oregon is not adversely affected and that privacy concerns are addressed.”

When the task force’s study and test were in the news in 2006 and 2007, critics worried that the technology could be used to track where vehicles go, not just how far they travel, and that this information would somehow be stored by the government.

In more than one interview with the Democrat-Herald and others, James Whitty, the ODOT official in charge of the project, tried to assure the public that tracking people’s travels was not in the plans.