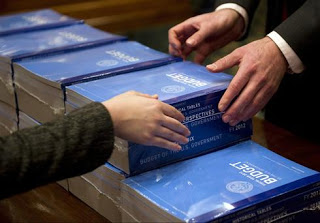 as tax revenues drop, US borrows 40¢ of every dollar spent

from voanews: One key reason that U.S. President Barack Obama, his Democratic Party allies in the Congress and rival Republicans are squabbling over the budget is that the budget deficit is expected to hit its highest level in decades. Newly published budget documents say the deficit is forecast to hit 10.9 percent of the gross domestic product in 2011. Many economists say deficits above 3 percent are not sustainable. Mr. Obama's proposed budget is supposed to cut the deficit to a bit over 3 percent by 2015 with a combination of spending cuts and tax increases. Those proposed reductions would cut billions of dollars from 200 programs, including some that help poor people pay heating bills and others that help cities build water treatment facilities. The revenue increases would come from ending some tax breaks for the wealthiest Americans and oil companies.