worst freeze in 60yrs wipes out crops across US/mexico border 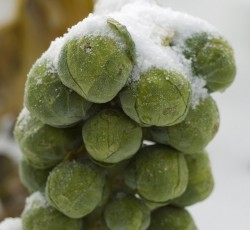 from end of the american dream: Get ready to pay a lot more for produce at the supermarket. In early February the worst freeze in 60 years wiped out entire crops all across the southwestern U.S. and northern Mexico. Already, it has been reported that some U.S. supermarkets have doubled or even tripled prices for certain produce items. Yes, you read that correctly. The price of certain vegetables is actually doubling or even tripling in many U.S. supermarkets.

The really bizarre weather that we have been seeing all over the globe this winter is really playing havoc with food prices. The global price of food hit an all-time record during the month of January, and most observers expect food prices to continue to soar. Even before this recent horrible freeze in the southwestern U.S. and northern Mexico, global food prices were pushed higher by unprecedented flooding in Australia and Brazil, and key agricultural areas of China are now experiencing their worst drought in 200 years. Things are getting really crazy out there. Produce prices in the U.S. are eventually expected to return back to normal levels, but this just shows how dramatically food prices can change when a major disaster happens.

Most Americans assume that the United States is generally immune to food price shocks, so this recent freeze is going to shake a lot of people up. A whole lot of Americans are going to be really surprised the next time they go shopping for fresh produce.

For example, at one supermarket in Portland, they have been forced to double or even triple the prices on many produce items as a result of this recent freeze.