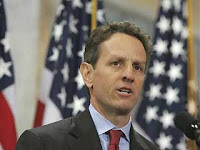 gordon brown appeals to US congress for help to save the world
from telegraph: Gordon Brown has attempted to establish himself as an international statesman with the vision to lead the world out of recession in a speech to the US Congress in Washington.

from fox: The pot has issued the kettle an ultimatum: tax dodgers beware. Treasury Secretary Timothy Geithner, who was forced to fork up $34,000 in unpaid back taxes, told the House Ways and Means Committee Tuesday that the Obama administration will be going after people who avoid and evade taxes. In prepared remarks before Congress, he said the president is intent on "tackling tax shelters and other efforts to abuse our tax laws, including international tax evasion efforts." Geithner himself never used a tax haven to avoid payment, but did neglect to pay Medicare and Social Security taxes while he was a self-employed staffer for the International Monetary Fund. He even hired an accountant for two of the years he forgot to file.

theater of the mind controlled: limbaugh challenges obama to duel
from usa today: Rush Limbaugh, apparently taking to heart the Obama administration's description of him as the leader of the Republican Party, has invited President Obama to come on his radio show for a debate. The edgy, bombastic conservative, describing himself as a "harmless, lovable little fuzzball" and "the Last Man Standing," wrapped the invitation in a long series of jibes at Obama, his policies, his party, his aides, his speaking style and the entertaining he's done during his six weeks at the White House. "You are one of the most gifted public speakers of our age. I would think, Mr. President, you would jump at this opportunity," Limbaugh said on his show, which has millions of listeners on more than 600 radio stations. Read the whole segment here. There's even a cartoon invitation in fancy script.

obama announces plan to continue US military occupation of iraq
from wsws: President Obama formally announced his administration's plans for the continued US military occupation of Iraq on Friday [feb27], in remarks delivered at the Camp Lejeune marine base in North Carolina. Far from bringing the war to an end, the plans will maintain present troop levels for one year and ensure a substantial military presence for at least three years, through the end of 2011.

obama: change, but not from bush 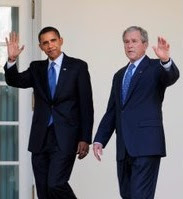 from ap: For all the sweeping changes that President Barack Obama has delivered, there also has been an ample helping of more-of-the-same. The Bush policy of imprisoning enemy combatants in Afghanistan without trial? The Obama White House is OK with that. The Bush tax cuts for the rich that candidate Obama promised to wipe out early? President Obama will let them run their course. The Bush team's claim of a "state secrets" privilege to avoid releasing information? The Obama White House has agreed thrice over, even as it reviews the policy. Across the landscape of government, there are plenty of other instances in which Obama is staying his Republican predecessor's course, at least for now.

politico conflates obama 'birthers' with 9/11 truthers
from politico: Bill Clinton had the Vince Foster "murder." George W. Bush had 9/11 Truth. And the new administration has brought with it a new culture of conspiracy: The Birthers. Out of the gaze of the mainstream and even the conservative media is a flourishing culture of advocates, theorists and lawyers, all devoted to proving that Barack Obama isn't eligible to be president of the United States.

obama & biden chipped or wearing tracking devices?
from the memory hole: While profiling White House Chief of Staff Rahm Emanuel for The New Yorker, Ryan Lizza saw something interesting in Emanuel’s office. It’s mentioned only in passing: "Next to his computer monitor is a smaller screen that looks like a handheld G.P.S. device and tells Emanuel where the President and senior White House officials are at all times." So, Obama, Biden, and other “senior White House officials” are lojacked? It makes sense that they’d be wearing/carrying something (or is it, as seems likely, an injected RFID chip?) that always gives their location in case of kidnapping, medical emergency, etc. But here’s the kicker: The device is obviously giving off a signal, which is how it can be tracked, and that signal could theoretically be intercepted by unauthorized parties. And it could probably be blocked, faked, etc. One of the main objections to Obama keeping his BlackBerry is that the signal could be used to track him. Now that he’s keeping it, he’s trackable in two ways. Undoubtedly, strong measures have been taken to prevent his trackability via the BlackBerry or the monitoring device. But in the case of the latter, it’s supposed to monitor his movements. Its whole purpose is to let certain people know where he is at any given moment. Thus, the signal can’t be completely blocked because then it would be useless. More questions: Who besides Emanuel is authorized to have the receivers showing the real-time location of the country’s leaders? How many receivers are there?

obama vs pentagon bureaucracy, round1 (of a fake fight)

from danger room: Everybody in D.C. knows that the way the federal government - and the Pentagon especially - handles contracts is beyond screwed-up. Sweetheart deals, busted budgets, and lax oversight, and missed deadlines are pretty much the norm, on every major deal. Yesterday [mar4], President Barack Obama sent a message yesterday to the federal paper-pushers: the days of contract shenanigans are over. But can anything - even a direct order from the Oval Office - change one of the planet's most dysfunctional bureaucracies? Obama signed a memorandum yesterday that gives the Office of Management and Budget until July 1 to issue new guidelines for identifying government contracts "wasteful, inefficient, or not otherwise likely to meet the agency's needs, and to formulate appropriate corrective action in a timely manner." This move would give agencies the potential authority to cancel contracts outright, if deemed necessary. Interpreted liberally, this could include most of the big weapons development deals that the Pentagon has on the books today. It's part of a larger push to rein in government spending. In a speech yesterday, Obama said government contracting practices needed to be overhauled to cut back on waste, fraud and abuse. "Over the last eight years, government spending on contracts has doubled to over $500 billion," he said. "Far too often, the spending is plagued by massive cost overruns, outright fraud, and the absence of oversight and accountability."