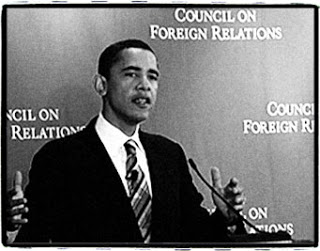 from steve watson: Meet some of president elect Obama’s leading foreign and domestic policy advisors and likely administration members, every one of them a prominent member of the Council On Foreign Relations. Will these people bring about "change" or will they continue to hold up the same entrenched system forged by the corporate elite for decades?

Susan E. Rice - Council on Foreign Relations, Brookings Institution - ...ill disposed towards Europe, has little understanding of the Middle East and would essentially follow the same policies of Condoleeza Rice if appointed the next Secretary of State or the National Security Adviser.

Anthony Lake - CFR, PNAC - Bill Clinton’s first national security adviser, who was criticized for the administration’s failure to confront the genocide in Rwanda in 1994 and now acknowledges the inaction as a major mistake.

Zbigniew Brzezinski - CFR, Trilateral Commission - Brzezinski is widely seen as the man who created Al Qaeda, and was involved in the Carter Administration plan to give arms, funding and training to the mujahideen in Afghanistan.

Richard Clarke - CFR - Former chief counter-terrorism adviser on the U.S. National Security Council under Bush. Notoriously turned against the Bush administration after 9/11 and the invasion of Iraq. Also advised Madeleine Albright during the Genocide in Rwanda.

Ivo Daalder - CFR, BI, PNAC - Co-authored a Washington Post op-ed with neocon Robert Kagan arguing that interventionism is a bipartisan affair that should be undertaken with the approval of our democratic allies.

Dennis Ross - CFR, TC, PNAC - Served as the director for policy planning in the State Department under President George H. W. Bush and special Middle East coordinator under President Bill Clinton. A noted supporter of the Iraq war, Ross is also a Foreign Affairs Analyst for the Fox News Channel.

Lawrence Korb - CFR, BI - Director of National Security Studies at the Council on Foreign Relations. Has criticized manor of the invasion of Iraq but has detailed plans to increase the manpower of the United States Army to fight the war on terror and to "spread liberal democratic values throughout the Middle East".

Bruce Reidel - CFR, BI - Former CIA analyst who wishes to expand the war on terror to fight Al Qaeda across the globe. Considered to be the reason behind Barack Obama’s Hawkish views on Pakistan and his Pro India leanings on Kashmir.

Stephen Flynn - CFR - Has been attributed with the idea for Obama’s much vaunted "Civilian Security Force". Flynn has written: "The United States should roughly replicate the Federal Reserve model by creating a Federal Security Reserve System (FSRS) with a national board of governors, 10 regional Homeland Security Districts, and 92 local branches called Metropolitan Anti-Terrorism Committees. The objective of this system would be to develop self-funding mechanisms to more fully engage a broad cross-section of American society to protect the country’s critical foundations from the widespread disruption that would arise from a terrorist attack."

Madeline Albright - CFR, BI - Currently serves on the Council on Foreign Relations Board of directors. Secretary of State and US Ambassador to the United Nations under Clinton. Did not take action against the genocide in Rwanda. Defended the sanctions against Iraq under Saddam Hussein. When asked by CBS’s 60 Minutes about the effects of sanctions: "We have heard that half a million children have died. I mean, that’s more children than died in Hiroshima. And, you know, is the price worth it?" Albright replied: "I think this is a very hard choice, but the price — we think the price is worth it."

janet napolitano picked to head homeland stupidity
from raw story: "Arizona Gov. Janet Napolitano (D) has been chosen to serve as secretary of the vast and troubled Department of Homeland Security for President-elect Obama," Politico's Mike Allen reported late Wednesday night. "Napolitano is a border governor who will now be responsible for immigration policy and border security, which are part of Homeland Security's myriad functions."

daschle accepts job as health secretary
from thinkprogress: Roll Call reports that Former Senate Minority Leader Tom Daschle (D-SD), who is a Distinguished Senior Fellow at the Center for American Progress, “has been offered the job of Health and Human Services secretary by President-elect Barack Obama and has accepted the job.” Daschle is also set to take on the position of “health care czar” in the Obama White House. CNN’s Ed Henry is also reporting he negotiated the “health care czar” position in order to be “the point person on all White House health-related issues.”

hillary to accept obama's offer of secretary of state job
from guardian: Hillary Clinton plans to accept the job of secretary of state offered by Barack Obama, who is reaching out to former rivals to build a broad coalition administration, the Guardian has learned. Obama's advisers have begun looking into Bill Clinton's foundation, which distributes millions of dollars to Africa to help with development, to ensure that there is no conflict of interest. But Democrats do not believe that the vetting is likely to be a problem.

war criminal & international fugitive, henry kissinger,
says hillary would be outstanding secretary of state
from bloomberg: Henry Kissinger said Hillary Clinton, a leading contender to be the Barack Obama’s Secretary of State, would be an “outstanding” appointment. “She is a lady of great intelligence, demonstrated enormous determination and would be an outstanding appointment,” Kissinger, who served in the post from 1973 to 1977 under presidents Richard Nixon and Gerald Ford, told the World Economic Forum’s India Economic Summit in New Delhi today.

obama team tilts toward gates
from consortium news: Barack Obama’s Pentagon transition team is sitting down with Defense Secretary Robert Gates in a move that some Beltway observers believe signals that the President-elect does plan to keep Gates on despite protests from Iraq War opponents. Another sign that Obama may be close to retaining Gates has been the lack of chatter from transition officials about alternative candidates – beyond cursory references to names like former Navy Secretary Richard Danzig, Republican Sen. Chuck Hagel and Democratic Sen. Jack Reed. It was Danzig, chief of the Navy under President Bill Clinton and a senior Obama adviser, who prominently praised Gates during the campaign. He said Gates “is a very good Secretary of Defense and would be an even better one in an Obama administration.”

soros think tank becomes obama policy front
from bloomberg: Three blocks from the White House, on the 10th floor of a sleek glass building, young workers pound at computers, with giant flat-screen TVs overhead. It has the look and feel of a high-tech startup. In many ways it is. The product is ideas. Thanks in part to funding from benefactors such as billionaire George Soros, the Center for American Progress has become in just five years an intellectual wellspring for Democratic policy proposals, including many that are shaping the agenda of the new Obama administration.