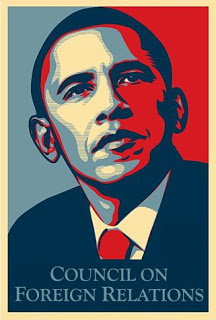 from current: Echoing Vice President-Elect Joe Biden's promise of a generated crisis and Colin Powell's revelation of a crisis that will happen on January 21 or 22, we now have the president of the Council on Foreign Relations and Bilderberger Richard Haass' similar predictions of doom and gloom scheduled for President-Elect Obama: While foreign leaders may or may not choose to test Obama, "the one thing I'm sure of is, events will test him," Council on Foreign Relations president Richard Haass said. "There will be coups ... There will be genocide ... There will be terrorism."

warnings from world leaders all within 72 hours

brzezinski: last 2 US presidents tested early by al-ciada attacks
from debkafile: President Carter’s former national security adviser Zbigniew Brzezinski says president-elect Barack Obama may be tested by terrorists after he takes office on Jan. 20. Speaking to Deutsche Welle, he pointed out that at least two US presidents were tested early in office – the two World Trade Center attacks occurred in the first year of Bill Clinton’s and George W. Bush’s presidencies. Brzezinski added that changing the substance of US policies is not as easy as it sounds and Obama may be incapable of bringing “dramatic change” to Washington.

obama told to beware of huge al-ciada attack
from times online: Barack Obama is being given ominous advice from leaders on both sides of the Atlantic to brace himself for an early assault from terrorists. General Michael Hayden, director of the CIA, this week acknowledged that there were dangers during a presidential transition when new officials were coming in and getting accustomed to the challenges. But he added that no “real or artificial spike” in intercepted transmissions from terror suspects had been detected. President Bush has repeatedly described the acute vulnerability of the US during a transition. The Bush Administration has been defined largely by the 9/11 attacks, which came within a year of his taking office. His aides have pointed to al-Qaeda’s first assault on the World Trade Centre, which occurred little more than a month after Bill Clinton became President in 1993. There was an alleged attempt to bomb Glasgow airport in Gordon Brown’s first days in Downing Street and a London nightclub attack was narrowly thwarted. Lord West of Spithead, the Home Office Security Minister, spoke recently of a “huge threat”, saying: “There is another great plot building up again and we are monitoring this.”