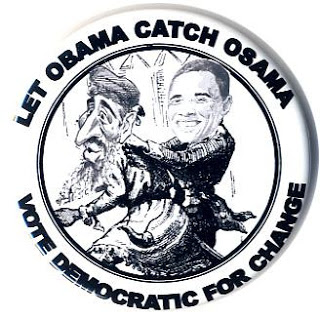 obama: US must capture or kill osama

from times online: Catching or killing Osama bin Laden will be one of the key targets of Barack Obama's administration as it is "critical" to American national security... Mr Obama made good on his rhetoric from the campaign trail that the hunt for bin Laden would remain top priority for the US. He told CBS that "it is a top priority for us to stamp out Al-Qaeda once and for all" and that killing or capturing the group’s mastermind Osama bin Laden was "critical" to the US.

when will obama give up the osama ghost hunt?
from robert baer: [W]hether bin Laden is alive or dead is actually pretty irrelevant. President-elect Barack Obama has no real choice but to revitalize the search for him, if only for political considerations. If al-Qaeda were to attack in the U.S. in the first months of his term, Obama would end up explaining why he wasn't more vigilant for the rest of it. But what if bin Laden really is dead, buried under a hundred tons of rock at Tora Bora, or so weakened that he might as well be dead? Indefinitely crashing around Afghanistan's and Pakistan's wild, mountainous tribal region on a ghost hunt cannot serve our interests. The longer we leave troops in Afghanistan, the worse the civil war there will become. One day Obama will need to give up the hunt — declare bin Laden either dead or irrelevant. He has more important enemies to deal with, from Iran to Russia.

obama's intel agenda: more of the same from 'change admin'
from antifascist-calling: While expectations may be high that the incoming Obama administration will reverse many of the worst features of the Bush regime--from warrantless wiretapping, illegal detention, torture, "targeted assassinations" and preemptive war--now that the cheering has stopped, expect more of the same. According to The Wall Street Journal, "President-elect Barack Obama is unlikely to radically overhaul controversial Bush administration intelligence policies, advisers say, an approach that is almost certain to create tension within the Democratic Party."

obama advisers: harsh interrogators will walk
from raw story: Even as President-elect Obama vowed "to regain America's moral stature in the world" during Sunday's 60 Minutes appearance, two of his senior advisers confessed there is no intent to pursue those in the Bush administration who engaged in torture. Speaking on condition of anonymity to the Associated Press, the advisers said that the plan is to put a stop to current interrogation methods and to "look forward" as opposed to focusing on prior transgressions. The Obama transition team did not offer a response before the report was published. Human Rights Watch, a non-profit watchdog group, is lobbying the President-elect for fast action on the abuses of the Bush era.

pentagon wants $581b from obama (war costs not included)
from danger room: Give the boys in the Pentagon credit; they've got chutzpah. While the federal government hemorrhages money - and everyone from Goldman Sachs to General Motors to the city of Philadelphia is looking for more Washington cash - the Defense Department is getting ready to ask for its biggest budget yet. The Pentagon is telling the Obama transition team that it wants $581 billion for the next fiscal year, an increase of $67 billion. And that doesn't even count cash needed to pay for the wars in Iraq and Afghanistan. The cash request "includes $524 billion in spending authority approved by the White House Office of Management and Budget this spring... as well as $57 billion in additional needs the Office of the Secretary of Defense identified over the summer," reports Inside Defense. The final figure does includes some money - $12 billion - to pay for a few "predictable war costs," Inside Defense adds. But that's less than what operations in Afghanistan and Iraq cost every month. In contrast, President Bush inherited a Pentagon budget that was a mere $302 billion.

why obama will continue star wars

from time: Missile-defense skeptics yearning for a fresh look at the wisdom of pumping $10 billion annually into missile defense aren't going to get it from Barack Obama when he moves into the Oval Office. The Russians - along with the two men most likely to end up running the Pentagon for the President-elect - have already made sure of that. It's a bracing reminder of just how difficult it is to counter momentum once a big-league defense program achieves what aerodynamicists call "escape velocity" - that synergy of speed and gravity that lets a vehicle soar smoothly into the skies.