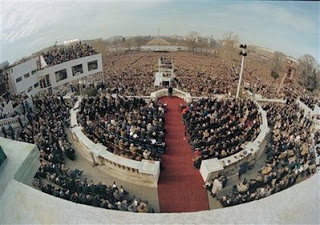 from ap: President-elect Barack Obama's inauguration is expected to draw 1 million-plus to the capital, and already some lawmakers have stopped taking ticket requests and hotels have booked up. Some people are bartering on Craigslist for places to stay for the Jan. 20 ceremony when the Illinois senator takes the oath of office. They are offering cash or even help with dishes for residents willing to open up their homes... The inauguration will come at the end of a four-day holiday for federal workers, following the Martin Luther King Jr. holiday on Jan. 19. Many area schools and some universities have canceled classes or are considering it.

imperialism you can believe in
from paul joseph watson: While naive, giddy and myopic establishment leftists have been celebrating the great “change” heralded by the election of Barack Obama, the President elect has been busy appointing people to key positions who advocate the same Neo-Con imperialist foreign policy crafted during eight years of the Bush administration. The New York Times, widely recognized as the voice of the establishment Democratic left, set the tone of what we can expect from an Obama foreign policy in a lead editorial last Sunday entitled, "A military for a dangerous new world." The editorial calls for U.S. military imperialism not to be scaled back under Obama, but to be vastly expanded both in terms of budget and scope.

obama won't stop the collapse of the american empire

obama calls on his obamazoid army to march again
from mcclatchy: President-elect Barack Obama's 3 million campaign volunteers got re-enlistment notices this week. Campaign manager David Plouffe, in a mass e-mail sent Wednesday to former workers, asked how much time they can spare for four missions integral to Obama's effort to transform his victory into a broader political movement.

obama: return to elite status quo
from online journal: The election triumph of Barack Obama and the return of power to the Democrats was a cause for a split second of relief, but not elation. What the world learned is that it will not be subjected to a McCain-Palin presidency, which certainly would have ushered in horrors, violence, and insanity that likely would have dwarfed those of Bush-Cheney. But the arrival of Obama as the new imperial figurehead of the Anglo-American empire is not a victory of, or for, the people. It will not signify a dramatic upheaval, in any way, and by no means is any sort of revolution at hand. Nor is Obama’s ascendancy about “you.” It is about “them.” This election was a necessary rotation of management, scripted at the highest levels of the Anglo-American elite.

video: get your war on: new world order 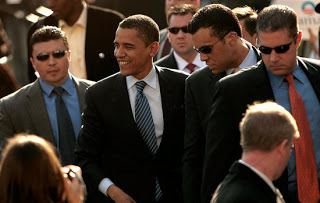 from danger room: The Secret Service is tasked with protecting the President of the United States from assailants; and given that President-elect Obama has already been the target of assassination plots they may have their work cut out after January. But they have more than earpiece radios and armored limos to help them; the Secret Service can call on the very latest technology. Documents from a recent court case indicate that they have advanced directed-energy devices which are highly classified. You may remember Donald Friedman, who claims that government agencies are misusing non-lethal directed-energy weapons. It’s easy to dismiss him as a crank. But his obsessive digging has turned up valuable information. For instance, one of his Freedom of Information Act (FOIA) requests unearthed a 1998 U.S. Army program looking at a microwave device to beam sound directly into the target's skull which the rest of us had missed. (The same technology underlies the Medusa non-lethal weapon.) Now he's found something else. Friedman's current court case involves attempts to extract information about any directed-energy weapons such as lasers and microwaves used by the Secret Service. Do they really have anything of the kind? A "Motion for an Enlargement of Time" (in other words, a request for a few more weeks) by the Secret Service's attorney indicates that they have something, and it's pretty secret.