Big Food Must Go: Why We Need to Radically Change the Way We Eat* 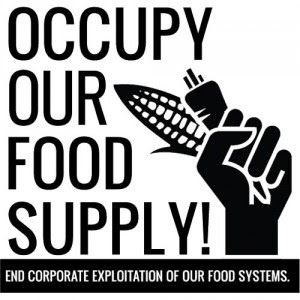 from sustainablebusiness.com: Occupy, environmental and food justice organizations are joining in a global day of action on February 27 to end corporate control of the food system and steer back society from the stranglehold of industrial giants like Cargill and Monsanto to a just, local food system. Vandana Shiva, renowned Indian environmentalist, who's been fighting against GMOs in her country, says: "Our food system has been hijacked by corporate giants from the Seed to the table. Seeds controlled by Monsanto, agribusiness trade controlled by Cargill, processing controlled by Pepsi and Philip Morris, retail controlled by Walmart - is a recipe for Food Dictatorship." (Learn how Monsanto undermines a sustainable food system.)

In a Huffington Post op-ed, Willie Nelson, folk singer and President of Farm Aid, and Anna Lappé, author of Diet for a Small Planet, say: "Over the last thirty years, we have witnessed a massive consolidation of our food system. Never have so few corporations been responsible for more of our food chain. Of the 40,000 food items in a typical U.S. grocery store, more than half are now brought to us by just 10 corporations."

Today, three companies process more than 70 percent of all U.S. beef, Tyson, Cargill and JBS. More than 90 percent of soybean seeds and 80 percent of corn seeds used in the United States are sold by just one company: Monsanto. Four companies are responsible for up to 90 percent of the global trade in grain. And one in four food dollars is spent at Walmart. What does this matter for those of us who eat? Corporate control of our food system has led to the loss of millions of family farmers, the destruction of soil fertility, the pollution of our water, and health epidemics including type 2 diabetes, heart disease, and even certain forms of cancer. More and more, the choices that determine the food on our shelves are made by corporations concerned less with protecting our health, our environment, or our jobs than with profit margins and executive bonuses. This consolidation also fuels the influence of concentrated economic power in politics: Last year alone, the biggest food companies spent tens of millions lobbying on Capitol Hill with more than $37 million used in the fight against junk food marketing guidelines for kids.

Read about the growing movement of people returning to family farming to grow organic food. And read about the massive lawsuit against Monsanto. A coalition of nearly 400 businesses and organizations filed a legal petition with the FDA to require mandatory labeling of genetically engineered foods. Find an event near you and learn more: Website: http://occupyourfoodsupply.org/occupy-our-food-supply