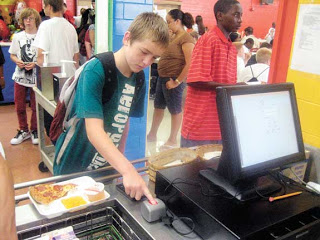 from north coast chronicle: For lunch Monday, Elyria High School served up pepperoni pizza to the students who came back for the first day of classes. But instead of students handing over cash, some placed their index fingers on small scanners and walked away with their lunches. “I’m just really glad I don’t have to remember a number every day or have a card or something,” said 14-year-old Korey Gallaher. “All you have to do is put your finger down and go.” With the start of the new school year well under way at the high school, a new lunch system is being piloted that will use student fingerprints instead of cards or personal identification numbers to access lunch accounts. “As long as there is money in my account, I won’t have to worry about anything,” said 14-year-old Stephanie Nieves. “It’s going to make lunch that much easier.” As of Monday, just the freshman class is using the fingerprint program, but by this time next week the entire student body — roughly 2,100 students — and staff will have a scan of their index fingers on file. “When it’s really up and running it will make things go a lot smoother and faster,” said Bill Jett, general manager of Sodexo, the district’s food service provider.