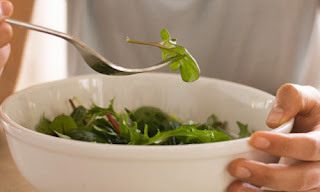 from guardian: Eating disorder charities are reporting a rise in the number of people suffering from a serious psychological condition characterised by an obsession with healthy eating. The condition, orthorexia nervosa, affects equal numbers of men and women, but sufferers tend to be aged over 30, middle-class and well-educated. The condition was named by a Californian doctor, Steven Bratman, in 1997, and is described as a "fixation on righteous eating". Until a few years ago, there were so few sufferers that doctors usually included them under the catch-all label of "Ednos" – eating disorders not otherwise recognised. Now, experts say, orthorexics take up such a significant proportion of the Ednos group that they should be treated separately. "I am definitely seeing significantly more orthorexics than just a few years ago," said Ursula Philpot, chair of the British Dietetic Association's mental health group. "Other eating disorders focus on quantity of food but orthorexics can be overweight or look normal. They are solely concerned with the quality of the food they put in their bodies, refining and restricting their diets according to their personal understanding of which foods are truly 'pure'."