oligarchy in the uk: obamessiah, g20 & the bankster nwo

… our misleaders gathered to pose as saviors from an econocrash that they created… and now, the g20 has come down from the mountain with 6 commandments toward the new world order…

ahead of g20, council told to switch off illegal £15m cctv

from guardian: The security operation at this week’s G20 summit was thrown into chaos last night when it emerged that the entire network of central London’s wireless CCTV cameras will have to be turned off because of a legal ruling. The Department for Transport (DfT) has ruled that Westminster council’s mobile road cameras – a third of the authority’s CCTV network – “do not fully meet the resolution standards required” and must be switched off by midnight tomorrow. The blackout begins on the eve of the summit, when world leaders arrive in the capital and protesters take to the streets.

where is the new jfk we expected? 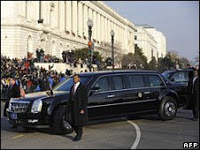 from bbc: You can take the man out of the White House. But you can’t take the White House away from the man. And US President Barack Obama has arrived in London for the G20 summit with a large contingent of the White House staff with him. Hundreds of security guards, doctors, chefs and others are accompanying President Obama on his visit, and the entourage includes a number of presidential vehicles – including his new armour-plated limousine, The Beast, and aeroplane, Air Force One. The 4,000 sq ft Boeing 747 is fully equipped for the president to work while he is in the air. The exercise-loving president will even be able to use the onboard gym to keep fit inflight. The plane is fitted with some robust security equipment including shields to protect its instruments from an electromagnetic pulse. The communications equipment is even capable of withstanding radiation from a nuclear attack.

obama gives the queen of an ipod

from csmonitor: Well, it’s better than giving her a bunch of DVDs that don’t work. President Obama went to the Buckingham Palace today in London where he and first lady Michelle had a lovely tea with the Queen of England. The press corps from both sides of the Pond was paying close attention to this meeting. After all, it was another gift exchange. Something the president didn’t do too well the last time out. British Prime Minister Gordon Brown gave Obama an ornamental pen holder carved from the timbers of the HMS Gannet — an anti-slave ship from the 1800s. President Obama, on the other hand, treated the gift exchange like a Secret Santa party forking over a bunch of American movies on DVDs. If that wasn’t bad enough, it turns out they didn’t work. They weren’t compatible with British DVD players. Read all about this here.

g20 meetings: the european union is in tatters

from daily mail: Gordon Brown has made an overtly religious call for a new world order based on the ‘deep moral sense‘ shared by all faiths. Making the first speech by a serving Prime Minister at St Paul’s Cathedral in London, he quoted scripture as he urged people to unite to forge a new ‘global society‘.