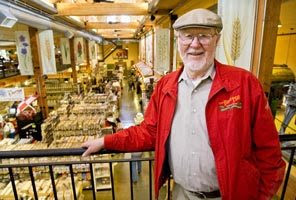 from seattle times: Scores of employees gathered to help Bob Moore celebrate his 81st birthday this week at the company that bears his name, Bob's Red Mill Natural Foods.

Moore, whose mutual love of healthful eating and old-world technologies spawned an internationally distributed line of products, responded with a gift of his own — the whole company. The Employee Stock Ownership Plan that Moore unveiled means that his 209 employees now own the place and its 400 offerings of stone-ground flours, cereals and bread mixes.

"This is Bob taking care of us," said Lori Sobelson, who helps run the business' retail operation. "He expects a lot out of us, but really gives us the world in return."

Moore declined to say how much he thinks the company is worth. In 2004, however, one business publication estimated that year's revenue at more than $24 million. A company news release issued this week stated that Bob's Red Mill has chalked up an annual growth rate of between 20 percent and 30 percent every year since.