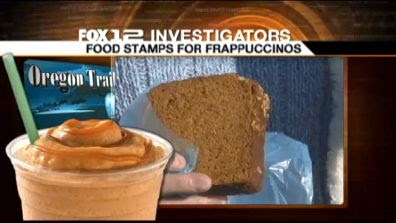 from foxnews: Oregon Trail Cards -- which are part of the state's food stamp program -- can be used to purchase luxury coffee concoctions at Starbucks counters inside grocery stores, investigators from Fox 12 in Oregon have discovered. With the help of Jackie Fowler, who has a "supplemental nutrition card" or Oregon Trail Card, Fox 12 visited an in-store Starbucks within a Safeway in the town of Salem. Fowler purchased a tall Frappuccino and a slice of pumpkin bread -- and paid for both using her Oregon Trail card.

"It's crazy," Fowler told Fox 12, showing off the receipt for $5.25. "They're overpriced as it is," said Fowler of the specialty drink. "That's money that somebody could be eating with -- a loaf of bread, a gallon of milk." Fowler, who made the purchase only for the purpose of Fox 12's story, says she thinks it's a huge misuse of the food assistance program.

A spokesman for Safeway told Fox 12 the store recently made the change as an added convenience to customers.

"We think that compliance with state laws is something we can easily do," Dan Floyd told Fox 12.

According to federal Supplemental Nutrition Assistance Program (SNAP) guidelines, people cannot buy foods that will be eaten in the store or hot foods. However, luxury items that are allowed include soft drinks, candy, cookies, ice cream, even bakery cakes and energy drinks that have a nutrition facts label.

"It's a luxury item. If you really want [a Frappuccino], save your money and go buy one. Don't use the system," Fowler told Fox 12.

A spokesman with the State Department of Human Services told Fox 12 he wasn't aware this practice was happening.

"We'll contact these grocery stores to get more information and make sure they're operating within the SNAP guidelines," said DHS communications director Gene Evans.

"They need to do something to stop it," said Fowler.