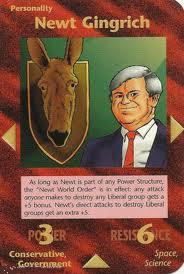 Texe Marrs provides insight into background of presidential candidate, Newt Gingrich, which can't be found in mainstream media with article, "The Illuminati Choice for 2012".  Marrs exposes Gingrich for loyalty to the Zionist agenda, also, his recent "conversion" to Catholicism and ties to Opus Dei, "another group of money men." Mitt Romney and Rick Perry may be corporate puppets, but remain orders of magnitude less dangerous than Gingrich. Former Speaker Gingrich, a loose cannon, changed his positions with the years mostly to highest bidders.  Alex Jones on his Dec. 2 program (near end hour one), calls Gingrich the Fox candidate, an illuminist and questions accuracy of polls that show Gingrich in front? Jones and Marrs seem in agreement most dangerous of all is  Gingrich involvement in the "Third Wave".

Marrs observes, "Gingrich has not been shy about presenting his “Third Wave” Plan. He flatly states that his goal is to end the old America forever. Insiders Alvin and Heidi Toffler (Jews) enlisted the endorsement of Gingrich and the three set forth this plan in the Tofflers’ sinister Illuminist volume, Creating a New Civilization. Gingrich actually wrote the foreword for this ungodly, anti-American book...Gingrich and Toffler openly declare their goals: to smash Christianity, end American sovereignty, erase all national borders, wreck our entire existing civilization and kill off America’s 200-plus year constitutional history forever. Gingrich is a Communist revolutionary who dares to state outright that he intends to destroy the United States and set up a totalitarian New World Order."

A voter has to start, sometimes, by eliminating what is least desirable.  Do you want a total control matrix from cradle to grave, where your choices in life resemble the phoney ones of present Democrat and Republican candidates? Gingrich is evil as Jones said on his program!