events in japan poses no health risk in oregon at this time…
yet geologists say: japan-like quake could happen here… 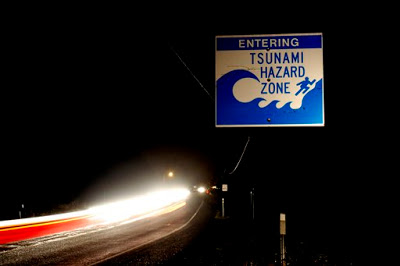 from the oregonian: Nuclear experts from Oregon and the U.S. responded Saturday to an explosion at a Japanese nuclear plant, saying there’s no reason to believe large waves of radiation will cross the Pacific Ocean. Air quality remained normal in Oregon, the Oregon Health Authority said Saturday afternoon. In a written statement, department officials said the blast posed no risk to the state. The U.S. Energy Department also said Saturday there were no immediate impacts in the United States. “There is no indication whatsoever that materials from the incidents in Japan have potential to have any meaningful effect on the U.S. homeland,” Stephanie Mueller, the U.S. energy department’s press secretary, wrote in an e-mail to The Oregonian.

Mueller said U.S. officials continue to work with the Japanese government to review the situation and “will provide whatever assistance they request to help them bring the reactors under control.”

Yet, many people wrote in blogs and online forums, questioning whether a jet stream might carry the radiation over to the U.S. Asked one Oregon Live commenter, co2: “Should I tell my grandson that he possibly is being exposed to extra radiation here in Oregon from this event? Or that the wind will bring it over in a week or so?”

“Although it sounds really, really bad, the reality is that this primary containment is in contact,” Woods said. “And as long as it’s intact, no large amounts or radioactive material will make it out.”

For that reason, Woods characterized Saturday’s explosion as entirely different than the Chernobyl disaster. The reactor lacked the critical primary container, Woods said, and the reactor burned in the open-air.

Although Saturday’s explosion likely released some radioactive material into the air, Woods called the amount relatively small. Areas closest to the reactor would be the most affected, he said.

“We’re 3,000 miles away,” Woods said. “I would really anticipate a very, very negligible amount of radioactive material making it as far as the U.S.“ 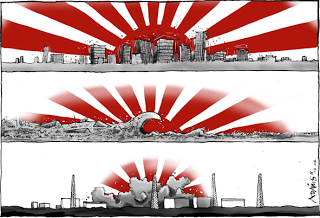 fallout: eugene stores see a run on radiation exposure tablets*
japan (less than) 48hrs away from nuclear disaster unless meltdown is stopped*
reuters liveblog on japan earthquake*
japan earthquake and tsunami:
america on nuclear alert after fukushima explosion*
russia’s zhirinovsky calls on japanese to move to russia*
14 reasons why the economic collapse of japan has begun*
twilight language: supermoon rising*
where are all the looters?*
cia sends usaid to japan to manage nuclear disinfo campaign*