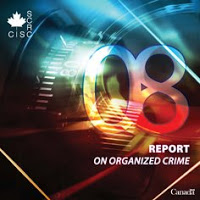 from afp: The weakened US dollar has fallen out of favor with organized crime groups to pay for drug shipments or to settle scores, a Canadian government report said Friday.

And if the greenback continues its slide in 2008, as expected, more and more criminals are likely to exchange euros for illicit goods, said Criminal Intelligence Service Canada in its annual report. (2mb pdf)

“The US dollar weakened significantly against other major currencies in 2007 and according to some economists, is expected to depreciate further in 2008,” said the report.

“As a consequence, other currencies – particularly the euro – are poised to weaken the US dollar’s dominance as the currency of choice for international remittances and payments,” it said.

“This trend could also drive an increase in observed instances of bulk-cash transfers denominated in currencies other than Canadian and US dollars,” the report added.