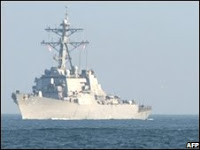 from irish times: Russian and US warships were engaged in a Black Sea stand-off last night, amid western warnings that the conflict in Georgia could destabilise other parts of Moscow's old empire. A US coast guard cutter carrying aid docked at the Georgian port of Batumi after bypassing the Russian-controlled port of Poti. Two other US navy vessels were offshore in the Black Sea. Meanwhile, 250km (155 miles) north, Russian warships landed in the separatist region of Abkhazia.

from times online: A new Cold War between Russia and the West grew steadily closer yesterday after the Kremlin gave a warning about “direct confrontation” between American and Russian warships in the Black Sea. Dmitri Peskov, a spokesman for Vladimir Putin, the Prime Minister, declared that Russia was taking “measures of precaution” against American and Nato naval ships. “Let’s hope we do not see any direct confrontation in that,” he said. Any attempt by countries in the West to isolate Russia would “definitely harm the economic interests of those states”, he said.

update: russia may cut oil flow to the west
from telegraph: Fears are mounting that Russia may restrict oil deliveries to Western Europe over coming days, in response to the threat of EU sanctions and Nato naval actions in the Black Sea. Any such move would be a dramatic escalation of the Georgia crisis and play havoc with the oil markets.