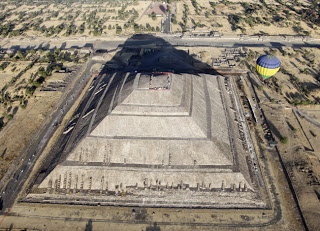 from ap: Archaeologists announced Tuesday that they dug to the very core of Mexico’s tallest pyramid and found what may be the original ceremonial offering placed on the site of the Pyramid of the Sun before construction began. The offerings found at the base of the pyramid in the Teotihuacan ruin site just north of Mexico City include a green serpentine stone mask so delicately carved and detailed that archaeologists believe it may have been a portrait. The find also includes 11 ceremonial clay pots dedicated to a rain god similar to Tlaloc, who was still worshipped in the area 1,500 years later, according to a statement by the National Institute of Anthropology and History, or INAH. The offerings, including bones of an eagle fed rabbits as well as feline and canine animals that haven’t yet been identified, were laid on a sort of rubble base where the temple was erected about A.D. 50. “We know that it was deposited as part of a consecration ritual for the construction of the Pyramid of the Sun,” said INAH archaeologist Enrique Perez Cortes.