video: congress ends 9/11 workers’ health care bill
from ny1: Congress has abandoned legislation to provide billions of dollars in health care for September 11th recovery workers. The program would have provided long term care for workers who were at the World Trade Center on or shortly after September 11, 2001 at an estimated cost of at least $5 billion. Mayor Michael Bloomberg strongly objected to a part of the bill that would have forced the city to pay for 10 percent of the program, saying it would place an undue burden on city taxpayers. In addition, the legislation would have reopened the federal September 11th Victim Compensation Fund, adding around $6 billion to the plan.

and speaking of bloomberg…

from thinkprogress: On Thursday, New York City Mayor Michael Bloomberg reportedly plans to announce that he will be seeking a third term, arguing that “the financial crisis unfolding in New York City demands his steady hand and proven business acumen.” The New York Times reports: “The move represents an about-face for Mr. Bloomberg, who has repeatedly said he supports term limits and once called an effort to revise the law ‘disgusting.’ He will apparently try to do so through legislation in the City Council, rather than the ballot box. Mr. Bloomberg’s gambit carries significant political risk. The city’s term limits law was passed twice by voters, in 1993 and 1996, and several polls show widespread popular support for keeping it in place. Under the plan Mr. Bloomberg has outlined to associates, those voters will have no say in the matter, raising the possibility of a backlash.” After 9/11, Rudy Giuliani also considered running for a third term, citing national security concerns. The Albany Project has more.

and then, there’s mike’s nazi-friend arnold…

from thinkprogress: Yesterday, California Gov. Arnold Schwarzenegger vetoed a bill that “would have made the birthday of gay political icon Harvey Milk a statewide ‘day of significance.’” Schwarzenegger, who opposes efforts to ban same-sex marriage in the state, explained his veto by saying that he believes Milk should “be recognized at the local level.” But the AP notes that conservative groups had lobbied the governor to oppose the measure: “In his veto message issued Tuesday, the governor said that while he respected the measure’s intent, he thinks Milk’s “contributions should continue to be recognized at the local level. Conservative groups had lobbied Schwarzenegger not to sign the legislation, sponsored by Assemblyman Mark Leno of San Francisco.” Milk, who was the first openly gay man to hold a prominent political office in America, was assassinated in 1978. Watch the trailer of Gus Van Sant’s upcoming biopic of Milk.

and speaking of california corruption… 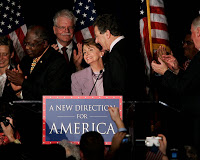 from washington times: House Speaker Nancy Pelosi has directed nearly $100,000 from her political action committee to her husband’s real estate and investment firm over the past decade, a practice of paying a spouse with political donations that she supported banning last year. Financial Leasing Services Inc. (FLS), owned by Paul F. Pelosi, has received $99,000 in rent, utilities and accounting fees from the speaker’s “PAC to the Future” over the PAC’s nine-year history. The payments have quadrupled since Mr. Pelosi took over as treasurer of his wife’s committee in 2007, Federal Election Commission records show. FLS is on track to take in $48,000 in payments this year alone – eight times as much as it received annually from 2000 to 2005, when the committee was run by another treasurer. Lawmakers’ frequent use of campaign donations to pay relatives emerged as an issue in the 2006 election campaigns, when the Jack Abramoff lobbying scandal gave Democrats fodder to criticize Republicans such as former House Majority Leader Tom DeLay of Texas and Rep. John T. Doolittle of California for putting their wives on their campaign and PAC payrolls for fundraising work.

mccain: ‘i always aspire to be a dictator’

from paul joseph watson: During an interview with the Des Moines Register editorial board yesterday, John McCain – presumably making an attempt at humor – said with a completely straight face that he aspired to be a dictator, while decrying the Congressional rejection of the bailout bill. “I just want to make a comment about the obvious issue and that is the failure of Congress to act yesterday. Its just not acceptable,” said McCain. “This is just a not acceptable situation. I’m not saying this is the perfect answer. If I were dictator, which I always aspire to be, I would write it a little bit differently.” McCain has urged the Bush administration to bypass the will of Congress and invoke executive orders to pass the bailout bill, along with a further $1 trillion dollar spend on buying up bad mortgage debt.

fbi prevents agents from telling ‘truth’ about 9/11 on pbs
from cq politics: The FBI has blocked two of its veteran counterterrorism agents from going public with accusations that the CIA deliberately withheld crucial intelligence before the Sept. 11, 2001 attacks. FBI Special Agents Mark Rossini and Douglas Miller have asked for permission to appear in an upcoming public television documentary, scheduled to air in January, on pre-9/11 rivalries between the CIA, FBI and National Security Agency. The program is a spin-off from The Shadow Factory: The Ultra-Secret NSA from 9/11 to the Eavesdropping on America, by acclaimed investigative reporter James Bamford, due out in a matter of days. The FBI denied Rossini and Miller permission to participate in the book or the PBS “NOVA” documentary, which is also being written and produced by Bamford, on grounds that the FBI “doesn’t want to stir up old conflicts with the CIA,” according to multiple reliable sources. Bamford, contacted by phone, said he could not comment because his publisher has embargoed his new book for release around Oct. 10.