from winter patriot: A huge truck bomb exploded at the entrance to the Marriott Hotel in Islamabad on Saturday evening, killing at least 40 people and wounding more than 150, the police said. This according to Carlotta Gall, who reports from Pakistan and Afghanistan for the New York Times: "The blast, one of the worst acts of terrorism in Pakistan’s history, went off just a few hundred yards from the prime minister’s house, where all the leaders of government were dining after the president’s address to Parliament." ... an address which was reported as a broadside against both terrorism and US intervention ...

In addition to the speech mentioned above, this attack comes mere days after Pakistan's announcement that its military would fight back if American troops attacked on its soil again, and a few days before a scheduled meeting between the presidents of Pakistan and USA, at which the fight against terrorism is on the agenda - or is the agenda! Thus, the timing can hardly be coincidental. And as you can see quite clearly from the photos posted here, this attack is orders of magnitude beyond the suicide terrorism which occurs in Pakistan on a regular basis. In other words, it appears to be state-sponsored. And you can probably guess which state. You might think everybody would hate these terrorists. But you'd be wrong. Some people like them. For some people, terror is good for business. The presidential candidates lost no time in pointing fingers - even though they can have no idea who was behind this atrocity... So there you have it: the government was "elected" and the threat is "enduring"; that's all the pretext these guys need for another hundred years of war. But what the heck? Your kids weren't planning to do anything different with their lives, were they?

the questionable timing of the pakistan blast
from 9/11 blogger: Let me see if I got this straight now.

Over the past 7 years we have dumped billions and billions of dollars into Pakistan to help with the Global War on Terror™. Yet, we know that former President Musharraf spent much of that money beefing up his military presence on the border of India, while another large part of that money, just went missing. Some of that money was traced to election fraud attempts. All of this, and the accepted wisdom is that the Taliban and bin Laden, are in Pakistan (of course I think he is dead, but that is beside the point).

When Musharraf lost the election, he shut down the democracy in Pakistan and arrested judges and opposition party leaders. Eventually, Pakistan shamed us by actually impeaching their president for corruption, while ours gets off Scott-Free thanks to Nancy Pelosi and a complicit congress.

Along comes a new President, President Asif Zardari, one that isn’t in the pocket of BushCo and low and behold, we start ramping up the rhetoric about needing to attack inside Pakistan “when ever we feel like it“. They even get the leading “progressive” man-god, Obama, to spin the same bullshit story.

Now, after several weeks of international bad press because of drone planes being piloted by 19 year olds with joy-sticks in California, blowing up families in Pakistan willy-nilly, after all that, the “terrorists” in Pakistan decide to blow up a second rate hotel there, killing civilians, and making them the bad guys once again? How’s that for the worst timing ever, huh? Well, the worst timing for them and the best possible timing for those troubled U.S. Military PR guys and all the politicians who had been saying just a month ago we need to step up military action in Pakistan.

Let’s face it, the Global War on Terror™ is the biggest thing since sliced bread for making serious cash, removing those troubling restrictions, and undermining the constitution at every turn.

but before the bombing, all of this was going on...

washington is risking war with pakistan
from robert baer: As Wall Street collapsed with a bang, almost no one noticed that we're on the brink of war with Pakistan. And, unfortunately, that's not too much of an exaggeration. On Tuesday, the Pakistan's military ordered its forces along the Afghan border to repulse all future American military incursions into Pakistan. The story has been subsequently downplayed, and the chairman of the joint chiefs of staff, Mike Mullen, flew to Islamabad, Pakistan's capital, to try to ease tensions. But the fact remains that American forces have and are violating Pakistani sovereignty.

unknown powder sent to US diplomats in pakistan
from ap: Two American diplomatic outposts in Pakistan received envelopes containing an unknown white powder last week, sparking a security scare, a U.S. Embassy spokesman said Sunday. Tests are being conducted on the substance, spokesman Lou Fintor said. He declined comment on whether any embassy staffers had become ill or were under observation. The envelopes were sent to the U.S. Consulate in Karachi on Thursday and the U.S. Embassy in Islamabad on Friday. Fintor said both facilities have remained open, with no plans to close them. "Embassy personnel followed established response procedures," Fintor said. "We applaud the rapid and appropriate response by our mailroom and security staff to contain any potential threats. We take threats of this type very seriously, hoax or not." He would not say where the envelopes had been mailed from, pending an investigation, or to whom they were addressed. 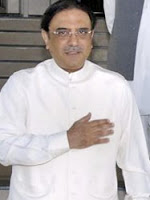 from ap: Benazir Bhutto's widower swept Pakistan's presidential election on Saturday, offering hope for stability to a nuclear-armed country feeling intense U.S. pressure to crack down on Islamic militants. In a grim reminder of the problems awaiting Asif Ali Zardari, rescuers in the northwest dug with their hands for survivors after at least 30 people were killed in a massive suicide bombing. Already head of the main ruling party, Zardari becomes one of the most powerful civilian leaders in Pakistan's turbulent 61-year history. Last month, he marshaled a coalition that forced stalwart U.S. ally Pervez Musharraf to quit as head of state.