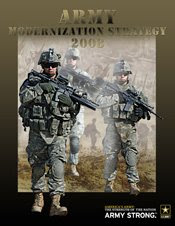 The US military sees the next 40yrs as continuous war against ideologically-motivated terrorists & competing with russia/china for natural resources & markets...

from irish times: As Gen. Ray Odierno takes command of US forces in Baghdad from troop surge architect Gen. David Petraeus, America has begun planning in earnest for its phased withdrawal. The extra brigade combat teams - or battlegroups - deployed to Iraq by Petraeus have already withdrawn and a further 8,000 troops have been diverted to Afghanistan. In January, the next president of the United States will conclude America's timetable for withdrawal in final negotiations with the Iraqi government.

Further evidence of America's future military intentions is contained in recently published strategy documents issued by the US military.

Under the auspices of the US department of defence and department of the army, the US military have just published a document entitled 2008 Army Modernization Strategy (7.4mb PDF) which makes for interesting reading against the current backdrop of deteriorating international fiscal, environmental, energy resource and security crises.

The 2008 modernisation strategy, written by Lt. Gen. Stephen Speakes, deputy chief of staff of the US army, contains the first explicit and official acknowledgment that the US military is dangerously overstretched internationally. It states simply: "The army is engaged in the third-longest war in our nation's history and . . . the Global War on Terrorism (GWOT) has caused the army to become out of balance with the demand for forces exceeding the sustainable supply."

Against this backdrop, the 90 page document sets out the future of international conflict for the next 30 to 40 years - as the US military sees it - and outlines the manner in which the military will sustain its current operations and prepare and "transform" itself for future "persistent" warfare...

The document refers to operations in Iraq in the past tense. It implies that operations in Afghanistan may be expanded. It states explicitly that the US military is preparing to fight continuous resource wars "for the long haul".

The document also describes explicitly the manner in which the earth's orbit is now deemed a legitimate zone for offensive military activity. This extraordinary document describes US strategic doctrine in terms worthy of 20th century science fiction.

The mix of 20th century science fiction and Orwellian perspectives unwittingly contained in the document appear rapidly to be materialising as fact.