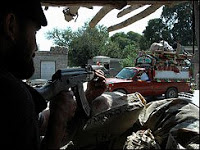 US jets violate pak airspace again
from intl news: Two US jetfighters Saturday night again intruded into Pakistan airspace over South Waziristan area, causing panic among the tribesman. However, neither the security forces nor the tribesmen fired upon the fighter planes. Sources in the tribal agency confirmed to The News that two US jetfighters for about 25 minutes hovered over Angoor Adda, Baghar and Momin Tangi area of the agency. The planes that came across the border from troubled Paktika province of Afghanistan, after the flight over the area went back without any action.

taseer says ‘will impose economic martial law, if empowered’
from daily times: Punjab Governor Salmaan Taseer says if empowered, he will impose an ‘economic martial law’ and resolve the economic problems facing Pakistan. Speaking on Geo TV’s Aik Din Geo Kay Saath [A day with Geo], Taseer said he remained in prison when Pakistan Muslim League-Nawaz chief Nawaz Sharif was chief minister of Punjab, adding, “But neither I begged for pardon nor did I bow before anyone.”

from cbs/ap: Pakistan's security officials put all of the country's airports on "red alert" Thursday after intelligence warnings of a suicide attack. "We had very credible information of a suicide attempt in Islamabad which prompted this step," a senior security official told CBS News' Farhan Bokhari. The official spoke on condition of anonymity because he was not authorized to address the matter

pakistan's soldiers fire on US copters
from danger room: Their president may be getting all flirty with our VP candidate. In the meantime, Pakistan's troops and American forces are getting into firefights with increasing regularity. The latest incident: Pakistani soldiers fired on U.S. helicopters - while those choppers were still in Afghan airspace. The shooting comes just a day after an American Predator spy drone mysteriously went down in Pakistan, and a week after Pakistani generals ordered their soldiers to "open fire" if U.S. troops crossed the border. Reports of skirmishes between American and Pakistani forces have become more and more common. But mostly, they've been based on semi-reliable Pakistani accounts, or on second-hand information. American officials have been reluctant to confirm anything, on the record. But this latest incident was reported by the Pentagon's own Armed Forces Press Service...

UPDATE: As soon as this post was published yesterday, commenter Jim smelled something fishy with the Pentagon's version of what went down. He wrote, "Pakistan troops on the Pakistani side of the border initiated small arms fire against the helicopters while they were 'still a mile inside Afghan airspace.' Now, the range of most small arms is, at best, 1000 yards. A helicopter pilot would be lucky to even see an AK muzzle flash from a mile away, slightly more if its a heavier machinegun. Methinks someone is lying, and it isn't the Pakistanis." Turns out, Jim was dead-on. This was a firefight between Pakistani and U.S.-Afghan ground patrols, American officials tells the Washington Post.

official story of pakistan truck bombing is a lie 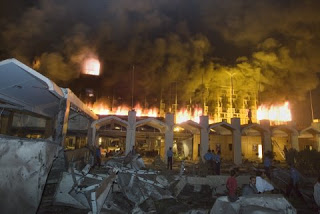 from rogue government: The recent truck bombing at the Marriott Hotel in Islamabad Pakistan has been sold to the people of the world as an operation conducted by a blood thirsty Al-Qaeda suicide bomber. The official story states that an Al-Qaeda suicide bomber blew up the Marriott Hotel with a truck bomb killing 53 people and injuring hundreds. Surveillance video of the so called truck bomb that they claim caused all of this death and destruction showed an explosion so weak that it was incapable of doing any real damage to a security shack that was located just a few feet away from where the truck was parked. People who were roughly 15 to 20 feet from the blast were even able to run away from the explosion. It is laughable to think that this truck bomb was responsible for causing massive damage to the Marriott Hotel killing and injuring all of those people. Watching the video is proof that it was just a cover story for the real operation. Foreign news outlets including the Daily Pakistan reported that there was a contingent of U.S. Marines who were in the hotel guarding boxes with unknown contents at the same time that this truck bombing occurred. With all this in mind, it is obvious that we are not getting the full story.

What’s even more ridiculous about the official story is the fact that they want us to believe that an Al-Qaeda suicide bomber would attack a hotel in a country that is on uncertain terms with the United States. In fact, the Pakistan military has recently been in combat with U.S. military units that have violated their national border. The official story simply doesn’t make any sense and can easily be written off as a lie.

marriott-attack, 9/11 executed by US*
cctv footage shows bombing of islamabad marriott*
militants claim marriott attack *
because you'll believe anything: unknown terrorist group claims responsibility for marriot bombing*
a stopped truck, 3 confused minutes & a horrible blast*
official: warning on terrorist attack in islamabad received 3 days before atack*
foreign press reports 'marriott marines mystery'*
why would 'terrorists' want to decapitate anti-US leadership in pakistan?*
what was that mysterious activity in the marriott by US marines?*

update: pakistan replaces chief of powerful spy agency
from afp: Pakistan has appointed a new head of its powerful Inter-Services Intelligence (ISI) agency, amid US accusations that the military spy organisation secretly backs Taliban rebels on the Afghan border. Lieutenant General Ahmed Shujaa Pasha, formerly head of military operations, was named director general of the ISI late Monday, a terse military statement announced. He replaces Lieutenant General Nadeem Taj. The move is part of a major shake-up of the army's top brass after US, Afghan and Indian officials alleged in recent months that the shadowy organisation was complicit in the Taliban insurgency wracking the region. 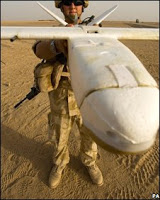 from bbc: A pilotless American drone has fired missiles in a border area of Pakistan, killing at least four people, Pakistani security officials say. Officials said a house was hit near the town of Mir Ali in North Waziristan and nine people were injured. Reports say the missiles were fired after the drone was shot at. Tension between the US and Pakistan has increased over cross-border incursions against militants by American military based in Afghanistan.

update: continuing US losses will lead to military strikes on pakistan
from daily times: If the United States forces in Afghanistan continue to suffer casualties inflicted by insurgents crossing over from Pakistan, the next administration, whether Republican or Democratic, will come under tremendous public pressure to make direct strikes on Pakistani targets, according to three South Asia experts. The observation came at a meeting organised by Khawaja M Ashraf, president of the Pakistani-American Congress, here on Sunday. The three experts who spoke on the prevailing situation in the region were, Walter Andersen of the Johns Hopkins University, Rodney Jones, who runs a local consultancy, and Jonathan Landay of McClatchy Newspapers, who has extensive experience of traveling in and writing about the region.