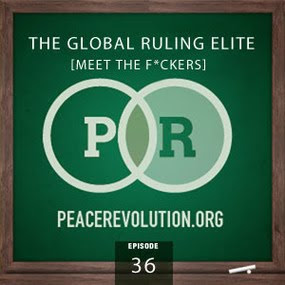 1.     Donation link for “The Ultimate History Lesson: A Weekend with John Taylor Gatto” multi-DVD interview project, currently in post-production. With over 5 hours of interview footage, this is a collection of education which is invaluable.
a.     If you donate $50 or more towards the completion of this project, you will receive the entire DVD set; as our way of saying Thanks!
2.     Invitation to the Tragedy and Hope online critical thinking community
3.     Peace Revolution primary site (2009-2011)
4.     Peace Revolution backup stream (2006-2011, also includes the 9/11 Synchronicity Podcast)
5.     Tragedy and Hope dot com (all of our media productions, free to the public)
a.     On the top menu, there is a “Trivium” selection, which includes the Brain model discussed in Peace Revolution episodes.
6.     “A Peaceful Solution” by Willie Nelson w/thanks to the Willie Nelson Peace Research Institute
7.     T&H Partner Podcasts: Media Monarchy, Corbett Report, Gnostic Media, & Remedy Radio
8.     www.StartPage.com (It uses Google’s search algorithm, but doesn’t collect your private info and search history)
a.     StartPage search engine Firefox add-on
9.     (Music) Bolero, a one-movement orchestral piece by Maurice Ravel
10.  David Rothkopf (on Wikipedia)
a.     (Book) Superclass: The Global Power Elite and the World they are Creating (on Amazon)
11.  (Ref) The American Ruling Class by Lewis Lapham (on Wikipedia)
a.     Lewis Lapham (on Wikipedia)
i.    Lapham is a member of the Council on Foreign Relations
b.    (Video) The American Ruling Class by Lewis Lapham (on Netflix)
12.  (Book) With No Apologies: The Personal and Political Memoirs of United States Senator Barry M. Goldwater (on Amazon)
a.     Chapter 33: Our Non-Elected Rulers
13.  (Ref) Carnegie Endowment for International Peace (in the Brain Model)
14.  (Ref) Ford Foundation (in the Brain Model)
15.  (Ref) Rockefeller Foundation (in the Brain Model)
16.  (Video) Carnegie Endowment for International Peace presents “Rise of the Superclass” by David Rothkopf (on YouTube)
17.  (Video) David Rothkopf at Middlebury College discussing Superclass (on YouTube)
18.  (Video) Empire: Superclass / Al Jazeera (on YouTube)
19.  (Book) The Power Elite by C. Wright Mills 1959 (on Amazon)
20.  (Book) Foundations and their Influence by Rene Wormser (on Amazon)
21.  (Book) The Story of the Rockefeller Foundation by Raymond Fosdick (on Amazon)
22.  (Book) Without Conscience: The Disturbing World of Psychopaths by Dr. Robert Hare (on Amazon)
23.  (Book) Snakes in Suits: When Psychopaths Go to Work by Dr. Robert Hare (on Amazon)

previous: episode035 - the house of rothschild