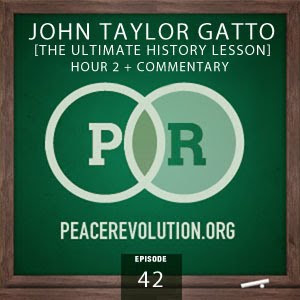 1.     Use the “Donate” buttons at the bottom of these notes, or on the side bar of this site, or the T&H Community, or the T&H dot com site, for “The Ultimate History Lesson: A Weekend with John Taylor Gatto” multi-DVD interview project, currently in post-production. With over 5 hours of interview footage, this is a collection of education which is invaluable.
a.     If you donate $50 or more towards the completion of this project, you will receive the entire DVD set; as our way of saying Thanks!
2.     Your invitation to the Tragedy and Hope online critical thinking community
3.     Peace Revolution Podcast’s primary hosting site (2009-2011)
4.     Peace Revolution Podcast’s backup hosting site (2006-2011, also includes the 9/11 Synchronicity Podcast episodes, starting at the bottom of the page)
5.     Tragedy and Hope dot com (all of our media productions, freeto the public)
a.     On the top menu, there is a “Trivium” selection, which includes the Brain model discussed in Peace Revolution episodes.
6.     “A Peaceful Solution” by Willie Nelson w/thanks to the Willie Nelson Peace Research Institute
7.     T&H Partner Podcasts: Media Monarchy, Corbett Report, Gnostic Media, & Remedy Radio
8.     Useful Tools
a.     www.StartPage.com (It uses Google’s search algorithm, but doesn’t collect your private info and search history)
b.     StartPage search engine Firefox add-on
9.     The Brain (mind mapping software to organize your research) download for FREE
a.     The free version works for all functions except web publication

Other productions by members of the T&H network:
Navigating Netflix (2011) our new video series wherein we conduct a critical analysis of films you might have missed; Navigating Netflix is available for free on YouTube.
“Memories of a Political Prisoner”, an interview with Professor Chengiah Ragaven, graduate of Oxford, Cambridge, and Sussex; AFTER he was a political prisoner, who was exiled from South Africa, during Apartheid. (2011)
What You’ve Been Missing! (2011) is our video series focusing in on the history of corruption in our public education system.
Top Documentary Films dot com: Hijacking Humanity by Paul Verge (2006)
Top Documentary Films dot com: Exposing the Noble Lie (2010)
Top Documentary Films dot com: The Pharmacratic Inquisition by Jan Irvin (2007)