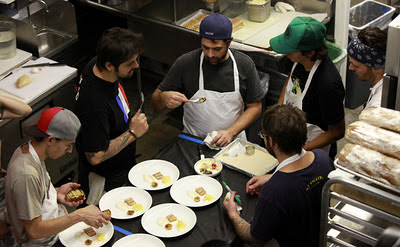 from aprl: As seen in today's New York Times, the Animal Protection and Rescue League protested a foie gras dinner held last night to call attention to a statewide ban on force feeding and sale of products of force feeding the group helped pass, which takes effect next year. Foie gras is the grossly enlarged liver of a force fed duck. "Our extensive research has only uncovered about 300 restaurants in California to have ever been serving foie gras," states APRL campaigns director Jonathan Wadley, PhD. "Of those, we have already convinced over 100 to remove it." Last month, the Los Angeles City Council unanimously passed a resolution applauding the animal protection measure and commending restaurants for removing the controversial item before the ban takes effect. Six other city councils--San Francisco, San Diego, Berkeley, Solana Beach, West Hollywood and Carlsbad--have done the same.