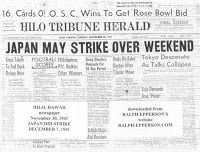 pearl harbor: 68yrs later, all war still based on deception

from gather: Today lives in infamy, but not for the reasons you’ve been told. The Japanese attack on Pearl Harbor, exactly 68 years ago today, was not an unprovoked, dastardly assault on an unsuspecting nation. It was a carefully orchestrated trap, engineered by President Franklin Delano Roosevelt. FDR’s purpose was to overcome domestic opposition to America’s involvement in the European war thousands of miles from the Pacific isles.

A tri-party agreement between Japan, Germany and Italy, executed one year earlier, gave Roosevelt the key he needed to get into Europe through the “back door.” The agreement stipulated that a war against any one of the parties would be considered to be a war against all three.

These facts would still be buried in the dustbin of history but for some sixteen years of work by author Robert Stinnett, uncovering and examining documents under the Freedom of Information Act. His eventual book on the subject is entitled Day of Deceit.