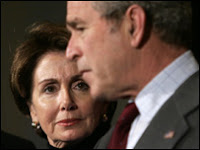 For it was Pelosi who quietly agreed to strip out of the $100 billion funding bill for Iraq a provision that would have required President Bush to seek congressional approval before launching any new war on Iran.

What went down, and why?

"Conservative Democrats as well as lawmakers concerned about the possible impact on Israel had argued for the change in strategy," wrote The Associated Press' David Espo and Matthew Lee...

"The speaker has erred dangerously and dramatically," writes Nichols. Her "disastrous misstep could haunt her and the Congress for years to come."

Nichols does not exaggerate.

If Bush now launches war on Iran, he can credibly say Congress and the Democrats gave him a green light. For Pelosi, by removing a provision saying Bush does not have the authority, de facto concedes he does have the authority.

Bush and Cheney need now not worry about Congress.

They have been flashed the go sign for war on Iran.