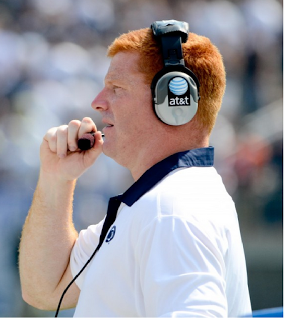 ‘Game Over’: Mike McQueary the True Hero of Penn State

A Penn State student, whose father works in the school administration, made a sorrowful entry recently at Onward State. It's an insightful entry, and possibly, represents hope for the future. This student felt, after reading the 23 page grand jury presentment, "...only sadness, depression and betrayal. A sense that we had finally begun to see just how deep this dark rabbit hole had gone," and instantly knew that coach Joe Paterno would be gone by the end of the week. The student relates reading "Game Over" in one sitting at a Barnes and Noble store, and believes, "it should be required reading for Penn State freshmen to understand not only the horrors and crimes of a minority, but of the appalling inaction of the majority."

The student mulls over, whether any good can be seen in the Penn State scandal:

..."if there are any heroes in this sordid affair, they are the police investigator who single-handedly launched a formal investigation, the eleven courageous young men who have stood up in the face of shame, disgrace and pain beyond belief to face their alleged tormentor, the parents — all of them mothers — who stopped at nothing until justice would be demanded … and Mike McQueary for sacrificing his livelihood, the regard of two of his former beloved coaches, and the wrath of a nation … to do the right thing 8 years after the fact and testify the truth...Many call McQueary a coward; they question his bravado and his manhood asking why he did nothing. But I ask myself, what more could he have done?"

This portrayal is, possibly, the bottom line. Mike McQueary agrees to step forward when asked to testify about what he saw! It's quite clear any testimony revealing a major scandal - even years later - would not be welcome. The student believes McQueary to be the hero: "[McQueary]...you are the end of an era, a man who selflessly gives himself up for a cause without thought to the personal sacrifice he might bear. Thank you for reminding this once-dreamer soul that true heroes still live. You are my hero…You are Penn State.” The present writer views Penn State tragedy much in same light and couldn't agree more! McQueary, whose name has fallen from the media, should be holding his head high!