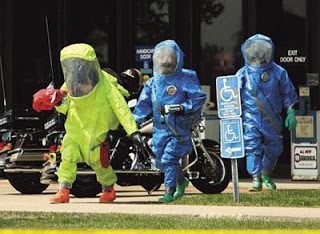 from paul joseph watson: The Pentagon has assured residents of Crystal City, Virginia, that the gases they will release downtown on Thursday are completely harmless, while on the other hand secretly hoping that the fearmongering about imminent biological terror attacks the tests are set to generate is contagious.

“The Pentagon is scheduled to release an odorless, invisible, and yes, harmless, gases into the city Thursday to test how quickly they spread through buildings, officials said.”

“The test is part of the military’s national security preparation for the capital area,” reports The Examiner.

The Pentagon will release perfluorocarbon tracers as well as sulfur hexafluoride amongst the general public without their consent, a practice that would otherwise be illegal in a free society.

Urban Shield: Crystal City Urban Transport Study will be another opportunity for the media to show armed men barking orders at citizens while trusted officials in hazmat suits deal with the deadly outbreak that’s “inevitably” going to happen for real somewhere down the line, we are constantly reminded.