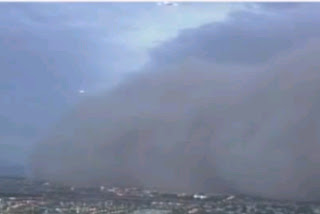 The Haboob video posted on the CNN website, created a stir when lights were spotted! Is it another Phoenix Lights sighting in the making? Jason McClellan at openminds.tv does an excellent job explaining the two lights were probably a helicopter (stationary light just above rolling clouds) and an airliner that had to make another pass at the airport (moving light at very top of picture). Kathie Bechmann's commentary on CNN video, would have you believe it's an UFO from all appearances. A Russian Today video provides perspective that probably came from the stationary light (a helicopter) of the plane flying through the Haboob. A viewer can be fooled by an optical illusion.