Phone hack charges may add to fallout for British PM 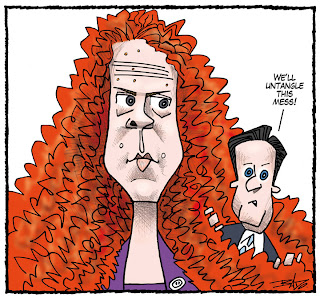 from theglobeandmail.com: Britain's phone hacking scandal entered a new and expanded criminal
phase Tuesday, with charges brought against two former members of Prime
Minister David Cameron's inner circle over a campaign of illegal
espionage that has rocked the country's establishment.


The Crown
Prosecution Service announced Tuesday that Andy Coulson and Rebekah Brooks, both former editors of Rupert Murdoch's now-shuttered News of
the World tabloid, were among eight people being charged with conspiring to intercept the communications of at least 600 people between 2000 and 2006. The alleged victims included everyone from a murdered teenager to Hollywood power couple Brad Pitt and Angelina Jolie.


Coulson and Brooks, who had previously been charged in related cases,
have both denied any wrongdoing and vowed to fight the charges. The
charges may further embarrass Cameron, who hired Coulson as his chief
communications adviser and once counted Brooks and her horse training
husband Charlie in his circle of friends. The prime minister is Brooks'
neighbor in the well-to-do Cotswolds town of Chipping Norton, and would
swing by the News Corp. executive's house for Christmas parties, go
horseback riding with her husband, and text her weekly.

The developing criminal investigation will shortly be overshadowed by
the long-awaited London Olympics, but the prospect of having Cameron's
former associates in the dock during lengthy trials could prove an
unwelcome sideshow as the prime minister battles to get Britain's
recession-scarred economy back on track.


“Of course we don't yet
know what the outcome of these trials will be, but the fact that this is
rumbling along is deeply unhelpful for a prime minister who is in some
trouble,” said Stephen Fielding, the director of the Center for British
Politics at the University of Nottingham.


The long running scandal
has spread beyond the Murdoch's News Corp., damaging the reputation of
British journalists as well as politicians and police suspected of
getting too cozy with the press.
Phone hacking first came to
public attention in 2006, when police arrested private investigator
Glenn Mulcaire and the News of the World's then-royal editor Clive
Goodman on suspicion of hacking into the voicemails of members of
Britain's royal household. Coulson quit as the tabloid's editor after
the pair was convicted, but insisted he'd had no inkling of their
wrongdoing.


For the next five years, the tabloid's owner,
Murdoch's News Corp., would claim that the illegal activity was an
aberration — the work of single rogue reporter. But a stream of lawsuits
as well as enterprising reporting by the Guardian and The New York
Times eventually exposed a massive cover-up. Prodded by the media,
police reopened their investigation. At News Corp., stony denials
turned into apologies sweetened with big settlements. Under pressure,
Coulson stepped down from his job as Cameron's adviser.


Still, it
wasn't until the Guardian revealed that the News of the World had hacked
into the voicemail of 13-year-old Milly Dowler — a school girl whose
2002 disappearance and murder transfixed the nation — that the scandal
really exploded. Britons who might've shrugged off intruding on
celebrities' lives were horrified by the news that reporters had
violated the privacy of a dead girl to hunt for scoops about her
whereabouts.


The ensuing furor shook the British establishment like an earthquake.


Once
so powerful that many referred to him as a permanent cabinet minister,
Rupert Murdoch's influence in Britain crumbled, and politicians who once
assiduously courted the Australian tycoon have rushed to distance
themselves from him.


Meanwhile Murdoch has distanced himself — and
his son James — from News Corp.’s British newspaper arm, News
International. Murdoch has shut the News of the World, resigned from a
series of directorships, and pulled James back to New York. Three
of Scotland Yard's top officers have resigned over their failure to get
to grips with the scandal; dozens of journalists, media executives, and
public figures have been arrested or resigned. The country's media
regulator — widely discredited by the scandal — has been scrapped.


The
saga has also tarnished the reputation of many whom, like British
Olympics Secretary Jeremy Hunt, were sympathetic to News Corp.’s
far-flung interests. Among those charged Tuesday were some of the
News of the World's best-known and most senior journalists. Prosecutors
named Stuart Kuttner, Greg Miskiw, Neville Thurlbeck, James Weatherup
and Ian Edmondson. Mulcaire, whose extensive notes have long been at the
center of the scandal, is also being prosecuted. Miskiw and
Weatherup are accused of intercepting the messages of actor Jude Law,
along with associates of his ex-wife Sadie Frost and former girlfriend
Sienna Miller. Edmondson and Weatherup are accused of spying on
former Beatle Paul McCartney, his ex-wife Heather Mills, and politicians
including former Deputy Prime Minister John Prescott. Thurlbeck and
Weatherup, meanwhile, are alleged to have eavesdropped on associates of
Jolie and Pitt, one of Hollywood's most famous couples.
Brooks, Coulson and Thurlbeck all promised Tuesday to fight the charges. Brooks,
who resigned as chief executive of News International after the Dowler
story broke, said she was “distressed and angry.” She called the
allegation that she conspired to spy on Milly “particularly upsetting.”
Coulson insisted he would never have done anything to harm the
investigation into Milly's disappearance.
Thurlbeck, meanwhile,
said he would make it clear that he always acted “under the strict
guidance and advice of News International's lawyers and under the
instructions of the newspaper's editors.”
The phone hacking fallout is far from finished.


As
the charges were revealed, Justice Brian Leveson announced the end of
his long-running inquiry into the culture and practices of Britain's
press, which was set up in the wake of the hacking scandal. He said he
would release his recommendations as soon as possible, although that is
expected to be months from now.


Scotland
Yard's Deputy Assistant Commissioner Sue Akers said Monday that
detectives are seeking evidence from two newspaper companies that are
rivals of Murdochs' and looking into more than 100 claims of computer
hacking, improper access to medical records and other misconduct
stemming from the scandal.