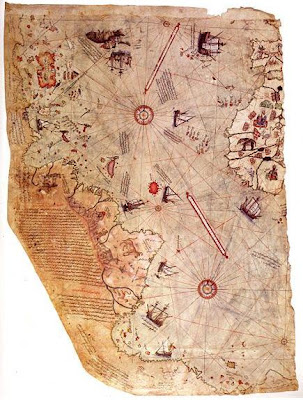 In 1929, an amazing map painted on parchment (gazelle skin) in 1513 by Turkish Admiral Piri Reis, was recovered from the Imperial Palace in Constantinople, while undergoing conversion to a museum of antiquities. The map represents one third of a larger world map, the remaining pieces are presumed lost forever. An article at Internet Sacred Text Archive reveals controversy that surrounds the Piri Reis Map, stems mainly from a 1966 book by Charles Hapgood, “Maps of the Ancient Sea Kings.” The image of Piri Reis’ map (pictured) is from the book’s first edition. Hapgood believed the map’s Antarctic coastline, represented the coast without glaciers and the work of an advanced civilization! An entry at World-Mysteries.com observes, “The northern coastline of Antarctica is perfectly detailed. The most puzzling however is not so much how Piri Reis managed to draw such an accurate map of the Antarctic region 300 years before it was discovered, but that the map shows the coastline under the ice. Geological evidence confirms that the latest date Queen Maud Land could have been charted in an ice-free state is 4000 BC.”

There are disagreements over accuracy of claims. Jonathan Crowe, in an article at The Map Room, dismisses claims observing, “as is often the case with pseudoscientific theories about old maps, innocuous explanations are ignored in favour of flights of fancy..”.

Another article at the Historic Mysteries website reports, “others argue that it shows evidence of the mapmaker’s skill and ability to measure and perform spherical trigonometry calculations centuries ahead of its time and that it shows proof of a worldwide seafaring civilization existing tens of thousands of years ago.”

The article ends on a rhetorical note: “There are many things that fasinate people about the Piri Reis map. It really makes you wonder just how much more has happened thousands of years ago that we have no knowledge of? Was there a civilization far more intelligent than we could ever imagine? If so, what happened to them? Do we face the same kind of fate?”

“Listed below are some of the things that people have noticed about the Piri Reis Map of 1513:

The maker of the map knew the accurate circumference of the Earth, within 50 miles.

The coastline and island that are shown in Antartica must have been navigated before its ice-free period – prior to 4000 B.C.

The map shows the Earth as seen from space.”

Graham Hancock recaps the Piri Reis map mystery in a two minute excerpt from, “The Mysterious Origins of Man“. The present writer finds the map an enigma, some claims seem indeed fanciful. However, the puzzle of the Antarctic coastline determines the Piri Reis map’s enduring fascination!