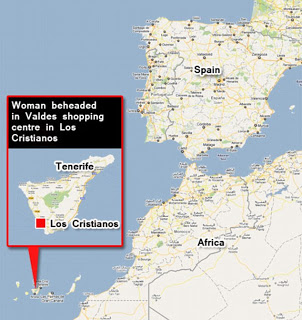 from daily mail: The homeless Bulgarian who decapitated a British woman in Tenerife yesterday thought he was 'a prophet of god', it emerged today. Local mayor José Reverón said the 28-year-old man was a bizarre individual who was known to police and had a history of intimidating passers-by on the street for yesterday's horrifying attack. The unnamed man was reportedly released from a psychiatric hospital in February and had a history of violent behaviour before brutally killing the 62-year-old Briton in a shopping centre in Los Cristianos yesterday. He was reportedly admitted to the psychiatric unit after knocking a stranger's teeth out on the street. As Mayor Reverón said the incident was 'the most horrific crime to hit the resort in recent years', questions were raised about why Spanish authorities had allowed the attacker to wander the streets.