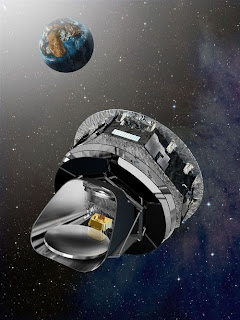 Planck Observatory (picture) supplies 15 months of cosmic background radiation data left over from just after the Big Bang. Data will be used in making detailed maps of universe.  In article, " "'Hacking the Cosmos' --Crunching Planck Data of Big-Bang Afterglow Reveals Daunting New Puzzles," The Daily Galaxy reports Planck was "...launched in 2009 to a point almost a million miles from Earth where it can look into deep space and map tiny differences in the cosmic microwave background, the faint glow of radiation left over from just after the big bang. The Planck observatory has produced the most detailed map to date of mass distribution in the universe." The article reflects excitement about new data, "'...maps are proving to be a goldmine containing stunning confirmations and new puzzles,' says Martin White, a Planck scientist and physicist with University of California Berkeley and at Lawrence Berkeley National Laboratory (Berkeley Lab). 'This data will form the cornerstone of our cosmological model for decades to come and spur new directions in research.'" The content of Universe has already undergone revision in light of new data:

"The new estimate of dark matter content in the universe is 26.8 percent, up from 24 percent, while dark energy falls to 68.3 percent, down from 71.4 percent. Normal matter now is 4.9 percent, up from 4.6 percent. At the same time, some curious features are observed that don’t quite fit with the current model. For example, the model assumes the sky is the same everywhere, but the light patterns are asymmetrical on two halves of the sky, and there is larger-than-expected cold spot extending over a patch of sky."