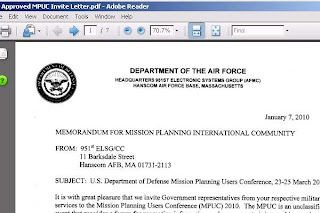 from the register: Unidentified hackers are running an ongoing cyber-espionage attack targeting US military contractors. Booby-trapped PDF files, posing as messages from the US Department of Defense, were emailed to US defence contractors last week. The document refers to a real conference due to be held in Las Vegas in March. Opening the malicious PDF file attached to the spoofed emails triggers an attempt to exploit an Adobe Reader vulnerability only patched by the software firm last Tuesday (12 January).

The infection of vulnerable systems opens up a backdoor that connects to a server hosted in Taiwan, though the hackers who set up the attack may potentially be located anywhere. Screen-shots illustrating what the booby-trapped PDF file looks like and more details on the attack can be found in an advisory by F-Secure here. The assault illustrates that cyber-espionage attacks are an ongoing problem, far from restricted to the IE-based attacks on Google and others in December. Those attacks became worldwide news after the tech giant threatened to quit China in response.