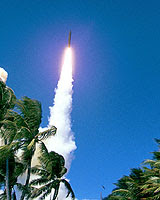 poland has 2nd thoughts about US missile defence

There is anxiety in Poland that Warsaw could further strain its already shaky ties with Moscow by agreeing to allow U.S. interceptor missiles on its territory.

Other Polish leaders, including new Foreign Minister Radek Sikorski, have warned against provoking Russia without being sure that Washington offers compensating benefits.

The United States insists the interceptors are aimed at countering an alleged Iranian missile threat. Moscow scoffs at that, saying that plan undermines Russia's nuclear deterrent.