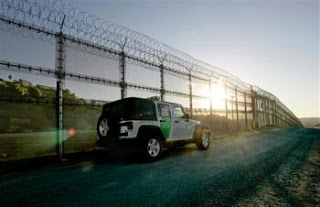 from ap: The fence along the U.S.-Mexico border is mostly finished. Customs and Border Protection spokesman Lloyd Easterling says that 601 miles of the project had been completed as of a week ago. Easterling says 69 miles of the fence still must be built to meet the goal set during the Bush administration. In December, then President-elect Barack Obama said he wanted to evaluate border security operations before he considers whether to finish building the fence under his administration. Easterling said the Obama White House has not told Homeland Security to stop building the fence. 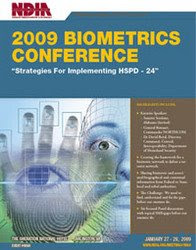 from ap: On the front lines in Iraq, U.S. troops can scan someone's eye or finger to try to determine if he is a potential enemy or has been connected to a terror attack. At military bases on U.S. soil, it's not that easy. The use of biometrics _ ranging from simple fingerprints to more advanced retinal and facial scans _ has thrived in Iraq, where soldiers carry handheld devices that enable them to link to databases filled with hundreds of thousands of identities. But in Colorado, military bases just 20 miles or so apart have different identification requirements and access procedures for personnel or contractors trying to get onto the property. The gaps raise security concerns and worries of another attempted massacre scheme, like the one foiled at Fort Dix in New Jersey in 2007. "Interestingly, we are probably further forward in using biometrics outside our country in some of the combat environments than we are inside our country," Air Force Gen. Gene Renuart, commander of U.S. Northern Command, said Tuesday. "We've got to find a way to fix that." Speaking at a biometrics conference, Renuart said the military services and law enforcement agencies around the country all carry different ID badges, and many are embedded with different information. And in some cases those agencies, he said, also have different computer databases that don't communicate well.

from danger room: Air Force Gen. Victor Renuart, the Pentagon's homeland security commander, thinks one of the tools the military uses to combat insurgents in Iraq - the collection of biometric data - is needed here at home. The Associated Press has this alarming intriguing quote from Renuart, who spoke Tuesday at a defense industry conference in northern Virginia: "Interestingly, we are probably further forward in using biometrics outside our country in some of the combat environments than we are inside our country," said the general. "We’ve got to find a way to fix that." Tuesday's conference was devoted to discussion of implementation of HSPD-24, a homeland security directive signed by President George W. Bush in 2008. The directive is supposed to harmonize the way federal agencies and the military collect, store, analyze - and share - biometric data. As it stands, the directive instructs the Attorney General to work with the Secretaries of State, Defense, and Homeland Security and the Director of National Intelligence and the Director of the Office of Science and Technology to create an action plan for implementing HSPD-24 by this June. The new administration may be reviewing a number of Bush directives, but now might be a really good time to read up on the military's use of biometric technology. Noah reported extensively on the use of biometrics to deny freedom of movement to insurgents in Anbar province; he also noted the privacy and human-rights implications. For good measure, go read this fascinating transcript of this bloggers' roundtable from 2007 with Lt. Col. John Velliquette, then the chief of biometrics collection in Iraq. In the conference Tuesday, Renuart seemed to be talking largely about security badges for military bases. But as anyone who's been on the receiving end of the U.S. military's biometric identification process knows, it's an intrusive process. More importantly, deciding who has access to the databases - and how that info will be shared - will continue to be a major concern for the government and for privacy advocates.

scotus says passenger can be frisked
from ap: The Supreme Court ruled Monday that police officers have leeway to frisk a passenger in a car stopped for a traffic violation even if nothing indicates the passenger has committed a crime or is about to do so. The court on Monday unanimously overruled an Arizona appeals court that threw out evidence found during such an encounter. The case involved a 2002 pat-down search of an Eloy, Ariz., man by an Oro Valley police officer, who found a gun and marijuana. The justices accepted Arizona's argument that traffic stops are inherently dangerous for police and that pat-downs are permissible when an officer has a reasonable suspicion that the passenger may be armed and dangerous. The pat-down is allowed if the police "harbor reasonable suspicion that a person subjected to the frisk is armed, and therefore dangerous to the safety of the police and public," Justice Ruth Bader Ginsburg said. The case is Arizona v. Johnson, 07-1122.

from tampa tribune: If an officer asks if you need help on Super Bowl Sunday, he might be more than just gracious. For the first time, the Transportation Security Administration's "Behavior Detection Officers" are enhancing security at the championship event by watching people for combinations of suspicious behavior. "They're trained to do exactly that – pick people out of a crowd," Gary Milano, federal security director for the TSA's Tampa office, said today. These officers don't have the power to arrest but are uniformed behavioral experts, Milano said. The TSA and the U.S. Secret Service trained about 70 Tampa police officers and Hillsborough County sheriff's deputies working the event in their techniques. Milano described them as "telltale signs of people about to engage in wrongdoing" based on the Israeli security system. Each behavior, such as profuse sweating, could be innocent on its own but raises eyebrows when coupled with other behaviors, Milano said. He declined to elaborate.

new orleans terror drills from jan27 to feb8
from katc: The New Orleans Police Department is warning residents not to panic if they see helicopters flying around the city after dark. The department will be hosting military training in and around the city between Jan. 27 and Feb. 8. The training includes the use of military helicopters flying after dark throughout the city. Police say they want residents of New Orleans and outlying areas to know it's a training event. The activities, authorities say, have been carefully planned and are safe.