police state surveillance: made in china

in china, a high-tech plan to track people 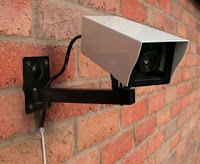 from new york times: At least 20,000 police surveillance cameras are being installed along streets here in southern China and will soon be guided by sophisticated computer software from an American-financed company to recognize automatically the faces of police suspects and detect unusual activity.

Starting this month in a port neighborhood and then spreading across Shenzhen, a city of 12.4 million people, residency cards fitted with powerful computer chips programmed by the same company will be issued to most citizens.

Data on the chip will include not just the citizen’s name and address but also work history, educational background, religion, ethnicity, police record, medical insurance status and landlord’s phone number. Even personal reproductive history will be included, for enforcement of China’s controversial “one child” policy. Plans are being studied to add credit histories, subway travel payments and small purchases charged to the card.

from new york times: Behind Shenzhen’s aggressive introduction of new police technologies is an unusual computer software company that has won some of the initial government contracts, China Public Security Technology, and the wealthy tycoon who runs it, Lin Jiang Huai.

China Public Security is traded in the United States on the obscure over-the-counter bulletin board market, but has a market capitalization of $185.3 million. It is preparing to seek a Nasdaq listing next year, Mr. Lin said.

Mr. Lin, 38, who holds more than $100 million worth of China Public Security stock, said that he dreamed as a boy of becoming a police officer to fight crime and defend the helpless. A powerfully built amateur weightlifter who is also a devout Buddhist, he made his first fortune as a manufacturer of an important component for DVD players.

Mr. Lin said the success of American technology during the invasion of Iraq inspired him to acquire the predecessor company for China Public Security and turn it to police work.

“I really felt strongly that the police would absolutely benefit from such technology,” he said. “Bush helped me get my vision.”

Mr. Lin bought an obscure e-commerce business here three years ago and changed its business focus. He then did a so-called reverse merger, in which he bought a tiny Florida printing company with sparsely traded stock, renamed it China Public Security, and turned the software business here into a subsidiary of the American company.

Helping Chinese police agencies has been profitable for China Public Security and its investors. The company estimated in May that it would earn an after-tax profit of $12.5 million on sales of $27 million this year. Two hedge funds that bought stakes have more than doubled their money since investing in early February.

One response to “police state surveillance: made in china”