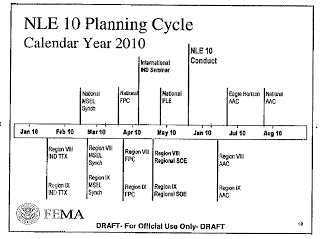 Paul Craig Roberts: The US is now a police state 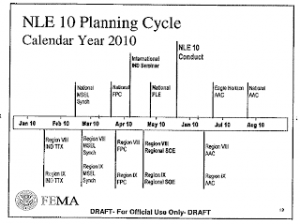 from socal martial law alerts: NLE 09 which occurred at the end of July last year, had an unprecedented amount of military movement and training for martial law. This year's National Level Exercise will be fully integrated with Eagle Horizon 2010, a drill focusing on continuity of government (COG--also known as Rex 84, and the implementation of PDD-51). NLE 09 did not have this added component.

Scenario: An improvised nuclear device detonation in a major US city. This is a "domestic terrorism" focused drill. Response to such destruction and COG plans enacted. Summary of NLE 10 here. Summary of Eagle Horizon 2009 (for reference) here.

CONR participates in 'Amalgam Arrow' - A live-fly exercise
from norad.mil: The North American Aerospace Defense Command and its geographical component, the Continental United States NORAD Region (CONR), will conduct Exercise Amalgam Arrow 10-05 Thursday. The short duration exercise will take place from 11 a.m. to noon Central Time over the skies of northern Minnesota and Wisconsin. Held in coordination with the Federal Aviation Administration and Transportation Security Administration,the exercise is designed to hone NORAD and CONR’s intercept and identification operations. These exercises are carefully planned and closely controlled to ensure NORAD's rapid response capability. An Air Force C-21 jet will take on the role as a track of interest.

Australia to use face-scanning & fingerprints to combat terrorism*

Video: FBI & San Fran cops run terror drill at BART station
from kgo: BART commuters did a double take when they arrived at the Millbrae station Wednesday. SWAT teams armed with automatic rifles and other assault equipment were bustling around a closed platform in view of the passengers as they got on and off another platform. SWAT teams from the FBI, San Francisco and BART police ran through different emergency scenarios - passengers being taken hostage, an armed assailant, explosives on a train. "Roughly every four months, we do what we call 'tubular training;' it's vehicles like planes, trains buses," FBI spokesperson Tom Ravenelle said. Wednesday's exercise on the trains was timely; Najibullah Zazi, the Afghan native with ties to al-Qaida, just pleaded guilty to federal charges that he and others made explosives to blow up trains on the New York subway system.