nsa revelations to have lasting implications 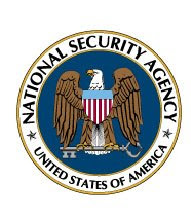 from raw story: Following the (actually-not-all-that-surprising) bombshell that the National Security Agency has been eavesdropping on calls between innocent US citizens, activists are considering re-opening a lawsuit alleging the government’s infringement upon constitutional rights. An appeals court last year dismissed a lawsuit brought by the American Civil Liberties Union against the NSA, arguing the plaintiffs the ACLU represented could not prove they had been targets of warrantless surveillance the NSA had engaged in. Now that ABC News has revealed evidence of NSA spooks listening to innocent Americans’ private phone calls, the civil liberties group may ask the court to reconsider. “Everything is being discussed right now,” ACLU attorney Jameel Jaffer told RAW STORY this week.

bamford: military intelligence spied on US

video: US army prepares to invade US

the ‘martial law’ hypothesis: a closer look & some skepticism

from nytimes: Sometimes, Jennifer Ross feels she cannot make a move at home without inviting the scorn of her daughters, 10-year-old Grace and 7-year-old Eliza. The Acura MDX she drives? A flagrant polluter. The bath at night to help her relax? A wasteful indulgence. The reusable shopping bags she forgot, again? Tsk, tsk.

“I have very, very environmentally conscious children — more so than me, I’m embarrassed to say,” said Ms. Ross, a social worker in Dobbs Ferry, N.Y. “They’re on my case about getting a hybrid car. They want me to replace all the light bulbs in the house with energy-saving bulbs.”

Ms. Ross’s children are part of what experts say is a growing army of “eco-kids” — steeped in environmentalism at school, in houses of worship, through scouting and even via popular culture — who try to hold their parents accountable at home. Amid their pride in their children’s zeal for all things green, the grown-ups sometimes end up feeling like scofflaws under the watchful eye of the pint-size eco-police, whose demands grow ever greater, and more expensive.

‘drop guns’ coming to america?
from infowars: In this video, former U.S. soldiers explain how they were told to carry “drop guns” to cover up the murder of Iraqi citizens. According to the soldiers, this is an informal military policy.

from danger room: After years of testing, the Active Denial System – the pain ray which drives off rioters with a microwave-like beam – could finally have its day. The Army is buying five of the truck-mounted systems for $25 million. But the energy weapon may face new hurdles, before it’s shipped off to the battlefield; a new report details how the supposedly non-lethal blaster could be turned into a flesh-frying killer… The announcement arrives on the same day as a new report from less-lethal weapons expert Dr. Jürgen Altmann that analyzes the physics of several directed energy weapons, including Active Denial, the Advanced Tactical Laser (used as a non-lethal weapon), the Pulsed Energy Projectile (a.k.a. “Maximum Pain” laser) and the Long Range Acoustic Device (a.k.a. “Acoustic Blaster”)… “As a consequence, the ADS provides the technical possibility to produce burns of second and third degree” 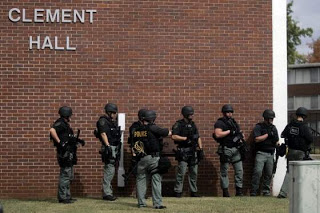 from usnews: Middle Tennessee State University was shut down Thursday around noon after authorities determined there was a “credible threat” to campus, according to Sidelines. The announcement was made after multiple university officials received E-mails Wednesday and Thursday threatening the student body, and authorities responded to three suspicious small fires set in a dorm Thursday. According to the campus police chief, at least one of the E-mails references “killing, bombing, and destruction,” but does not specify a location. Authorities are still unsure whether the fires and threats are related. Classes have been canceled for the rest of the week as state and local police sweep the campus, with their weapons drawn, according to the Tennesseean, looking for a male suspect. Officials did not reveal why he is being sought. MTSU is one of the largest undergraduate colleges in Tennessee with almost 24,000 students, most of whom live off campus. Class will restart October 15, after a previously scheduled fall break.

sheriff begins taking away concealed weapons permits
from oc register: The Sheriff’s Department has begun the process of revoking hundreds of concealed weapon permits across Orange County. This week, department officials confirmed that 146 letters have been sent out advising current license holders that their permits to carry firearms in public – called CCWs – are being revoked. There are currently 1,024 permit holders. “The Department has determined that your identified risk does not meet the good cause threshold as required under the new CCW policy based upon the information you provided. As a result of this determination, the Department’s present intention is to revoke your CCW license,” reads the form letter sent out this month…

[COMMENT: It is clear that the intention is to demonize gun ownership while making the ‘permit’ aspect convey a privilege rather than a right, as guarded by the 2nd amendment of the Constitution. Further, the claim that the former sheriff was ‘corrupt’ is meant to justify the revoking of permits, which are also associated emotionally as being wrong to hold.]