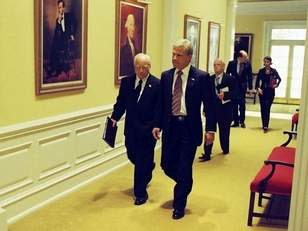 from raw replay: CNN’s Kareen Wynter reported that Oliver Stone’s new film, “W,” is aimed at independent voters and timed to effect the election. This video is from CNN’s American Morning, broadcast October 13, 2008.

a puzzling portrayal of a president
from washington post: "W.," the title of Oliver Stone's new biopic of President Bush, obviously refers to the subject's middle initial and nickname, but it could just as easily stand for "Why?" Why this movie -- a rushed, wildly uneven, tonally off-kilter caricature -- and why now? Why, when Americans and citizens around the globe are still coping with myriad depredations of Bush administration policies, would they want to pay money at the box office to see what amounts to an extended "Saturday Night Live" skit?

stone's balanced 'w' is no 'jfk'
from ap: All he wanted to do was watch baseball and drink beer. Instead, George W. Bush ended up being chosen as leader of the free world. That's Oliver Stone's surprisingly fair and balanced assessment of the president, who truly needs no further parodying, in "W." Stone, who previously dug up White House dirt with the conspiracy-laden "JFK" and the campy and paranoid "Nixon," has come up with a rather conventional biopic rather than an evisceration.

from mcclatchy: Watching "W.", you get a sense of the scrupulous care and respect with which director Oliver Stone and screenwriter Stanley Weiser approached their movie about the troubled presidency of George W. Bush. This is, for Stone, an unusually restrained and well-behaved film, one that is going to confound viewers expecting a free-for-all demonization of the 43rd president of the United States. What you don't get while watching "W." is a convincing argument that the movie needed to be made.

how unpopular is dubya? oliver stone's 'w' will tell us
from marketwatch: This week, Lions Gate will go a long way toward tapping the nation's mood. On Oct. 17, the film studio will release the long-awaited movie "W," director Oliver Stone's look at President George Bush. It will open on about 1,800 screens across America. The film is informally projected to amass ticket sales of about $10 million (but I suspect it will do better) in its initial weekend. The movie debuts at an opportune time to measure the president's relevance. Bush's approval ratings have sunk to near-historic lows. His somber proclamations on the financial meltdown and foreign policy issues have been largely ignored. Sarah Palin's emergence in the 2008 presidential campaign has all but pushed Bush off prime areas of the front page.

oliver stone: we made ‘vast mistake in last eight years’
from raw replay: Rachel Maddow is joined by director Oliver Stone to talk about his new movie, “W.,” a biopic about George W. Bush. This video is from MSNBC’s The Rachel Maddow Show, broadcast October 14, 2008.