from infowars: North Hollywood is going the way of Baltimore, Martin County, and Middlesbrough, England. It has installed “talking cameras,” ostensibly to ward off taggers and people who dump trash. “Los Angeles police are using motion-activated cameras to warn vandals that they’re being watched,” reports WOAI for NBC News. “The motion triggers a recorded voice that states, ‘This is the Los Angeles Police Department. It is illegal to spray graffiti or dump trash here.’ The voice warns vandals that they are being recorded and will be prosecuted. The camera provides a high-resolution image of the tagger and the vehicle. It can capture an image of a license plate from 250 feet.”

gates expands preemptive war doctrine to include nuclear strikes
from wsws: In a remarkable speech on nuclear policy delivered October 28 at the Carnegie Endowment for International Peace (CEIP), US Defense Secretary Robert Gates painted a dire portrait of international affairs and argued that Washington should expand the doctrine of pre-emptive war formulated by the Bush administration to include possible nuclear strikes. It is widely rumored that, in the likely event that Democrat Barack Obama wins next week's US presidential election, Obama will keep Gates as defense secretary. Gates' speech, given in the waning days of the Bush presidency, has the character of a policy declaration of the next US administration.

the new technology of repression
from consortium news: In its final months, the Bush administration is pressing ahead with a new generation of spy technology designed to strengthen the U.S. military’s ability to detect and eliminate suspected insurgents in Iraq and elsewhere based on computer analyses of their movements and activities. The Pentagon’s Defense Advanced Research Projects Agency (DARPA) has begun granting contracts to software firms to create algorithms (632kb PDF) that can be applied to the real-time video feeds from drone aircraft so the data can be sorted and stored on a wide range of human activities, from digging a ditch to climbing into a car to kissing someone.

from homestation: The question of whether the United States needs a new domestic intelligence service that is independent of law enforcement is examined by Greg Treverton of the RAND Corporation in a new report for Congress entitled "Reorganizing U.S. Domestic Intelligence." (1mb PDF)
"One of the questions in the fight against terrorism is whether the United States needs a dedicated domestic intelligence agency separate from law enforcement, on the model of many comparable democracies. To examine this issue, Congress directed that the Department of Homeland Security perform an independent study on the feasibility of creating a counterterrorism intelligence agency and the department turned to the RAND Corporation for this analysis but asked it specifically not to make a recommendation." 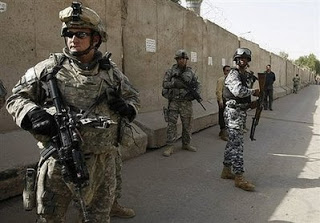 from paul joseph watson: Northcom has announced that two more U.S. military units will be assigned for domestic homeland security missions, bringing the total number of combat ready service members operating inside the U.S. to around 4,700, as fears grow about the increasing militarization of law enforcement. The announcement follows the controversy surrounding a September 8 Army Times report (revised on September 30), which revealed that the 3rd Infantry Division’s 1st Brigade Combat Team, fresh from combat duties in Iraq, would be operating inside America for tasks including “civil unrest and crowd control,” a detail that was later denied by Northcom despite the concession that forces would be armed with both non-lethal and lethal weapons as well as having access to tanks. “In the next three years the military plans to activate and train an estimated 4,700 service members for specialized domestic operations, according to Air Force Gen. Gene Renuart, commander of U.S. Northern Command, which was created in 2002 for homeland defense missions,” reports the Colorado Independent.

US border police arrest mexican troops
from reuters: U.S. border police arrested seven Mexican soldiers after they accidentally strayed over the international boundary into Arizona, authorities said. The U.S. Border Patrol said agents encountered the troops in a Humvee a short distance north of the border near Yuma, in far west Arizona, early on Friday. "The Border Patrol agents on scene established a dialogue with the subjects, who identified themselves as members of the Mexican military," the Border Patrol said in a news release. "The ... agents informed them of their presence within the United States. Upon notification, the subjects were peaceably taken into custody," it added.

at&t to try limiting subscribers' data use, too
from latimes: AT&T Inc. customers who obsessively play World of Warcraft while downloading dozens of movies: Your days of online impunity may be numbered. AT&T has joined the ranks of telecommunications companies that are exploring the idea of limiting the amount of bandwidth that subscribers can use each month. The company began this month to apply such limits, testing the policy first in Reno. Subscribers to AT&T's slowest Internet service there will be limited to downloading 20 gigabytes of data per month. Those who subscribe to the fastest plan will be able to download as much as 150 gigabytes per month. Anyone who goes over the limit will pay $1 per extra gigabyte of data downloaded.